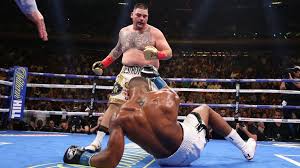 Usky won a unanimous decision on all judges’ card to become the third man in history to move from Cruiserweight and win World Heavyweight titles.

The scorecards after the fight read: 117-112; 116-112 and 115-113 all in favour of the new champion, Oleksandr Usyk!While Usyk remains undefeated, this is Joshua’s second loss in his professional career.