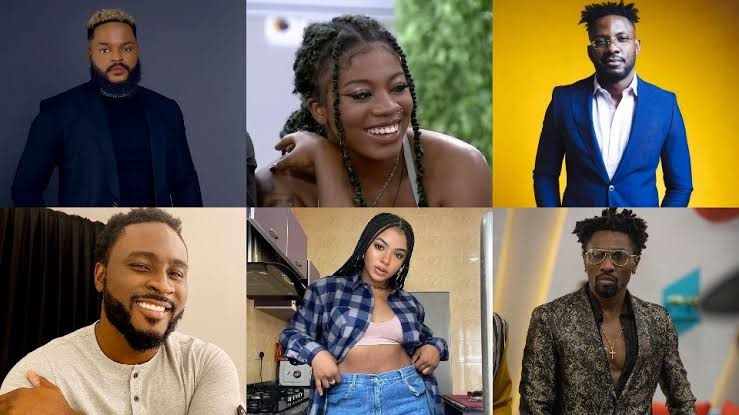 Big Brother Naija Shine Ya Eye housemate, Cross, stated that the initial top four finalists had already chosen Whitemoney as the winner of the show before Angel and Pere returned.

He said this on Monday, day 65 of the show, after Angel and Pere returned to the house to join Whitemoney, Cross, Liquorose, and Emmanuel as finalists.

Still in the mood of excitement due to their return to the show, Cross, Emmanuel and Liquorose, hailed Angel and Pere.

“So you made it,” Cross told Angel.

Pointing to Whitemoney, Cross said, “We have already put this one as the winner of the competition.”

Cross continued, “He has won the competition already. We’re just preparing our mind on who will come second, third, and fourth.”

Liquorose said, “As we’re now top six, we are no more sure again.”

They all chatted for some time and Whitemoney excused himself from the group.

Not long after, Angel also called Pere from the group and the duo went into the room, where Angel told him that Whitemoney wasn’t happy to see them.

On entering the room, Angel said, “You see what I told you about Whitemoney. He’s not happy.”

Pere asked who Angel was referring to and she said Whitemoney.

She answered, “Whitemoney. He’s not happy. See the way he was doing hahaha. That laugh was so fake.”

On Sunday, Pere and Angel who had faced fake eviction during the live show were pitted against each other for them to continue as finalists on the show.

The duo were isolated in a ‘white room’ in the BBNaija house and had to battle their way back into the show through ‘trucks and screwdrivers’, according to Biggie.

Though the voting poll shows that Pere had 25.31% of votes while Angel had 14.63%, the duo played the double jeopardy game and Biggie decided to reward both of them as finalists.