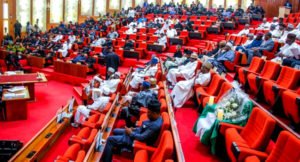 The Senate hassked the President, Major General Muhammadu Buhari (retd.), to declare bandits as terrorists in the country.

The red chamber also asked the commander-in-chief of the Armed Forces to wage a total war against the criminals, including bombing all their locations, to annihilate and eliminate them.

The Senate also asked Buhari to declare all known leadership of the bandits wanted and track them wherever they are, for arrest and prosecution.

These were part of the resolutions of the red chamber after considering a motion sponsored by Senator Ibrahim Gobir (Sokoto East), and co-sponsored by eight other senators.