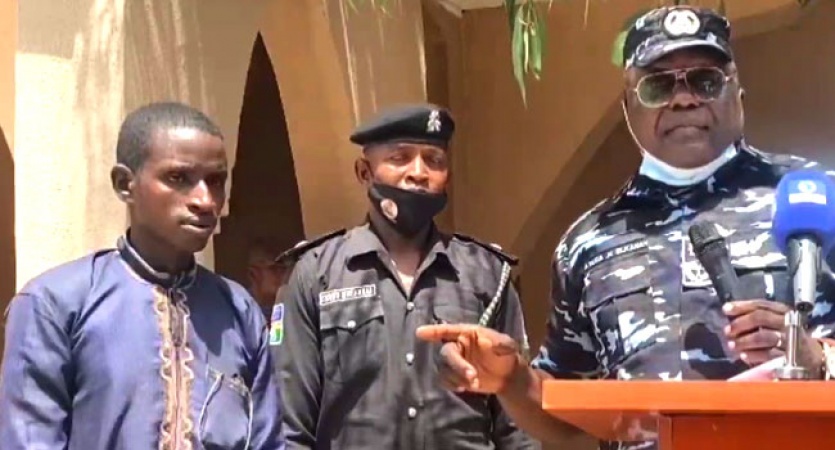 •Bello Rugga (left) was paraded by Mr Ayuba Elkana at the Police Headquarters in Gusau, the Zamfar

The Zamfara State Police Command says it has arrested one of the notorious commanders of bandits, Bello Ruga.

Commissioner of Police in Zamfara, Ayuba Elkana, who disclosed this to reporters, said Bello, also known as Bello Dan Malankara, was apprehended at a bandits’ camp in Gummi Local Government Area of the state.

“The bandit who happens to be one of the Turji’s commanders was the one in charge of Gummi, Gidan Bita, Malankare, and Kagara forest in Gummi LGA. He has been commanding a series of attacks and kidnaps in Gummi that led to the unwarranted killing of innocent people, and the kidnapping of many persons where ransoms were paid. The suspect who has many bandits under him also is in possession of AK 47 rifles,” he said during a briefing last Friday at the Police Headquarters in Gusau.

Meanwhile, Elkana announced that all vehicles with unauthorised tinted glass should be immediately removed.He also directed the police to arrest and prosecute owners of vehicles without plate numbers on all roads in the state.

The police commissioner also clarified the status of the measures announced by the state government to check the activities of bandits in Zamfara.

According to him, the ban on carrying more than a passenger on a motorcycle, as well as the use of motorcycles with clutches in 13 LGAs and some parts of Gusau, remains in force.

Elkana warned residents against non-compliance with the closure of weekly markets in the state, except in Gusau.He reminded them of the restriction of movement in and out of the 13 LGAs from 6am to 6pm, and from 8pm to 6am in the state capital.

The police commissioner, however, revealed that movement within Gusau metropolis has been extended to 12am, as announced by the Commissioner for Information in the state, Ibrahim Dosara.“All Keke Napep (tricycles) putting additional curtain to cover passengers is banned.

The suspension of communication networks in the 13 LGAs is still in force with the exception of Gusau metropolis,” he said.

Elkana appealed to the residents to exercise more patience and support the government in its bid to restore peace and security in the state.