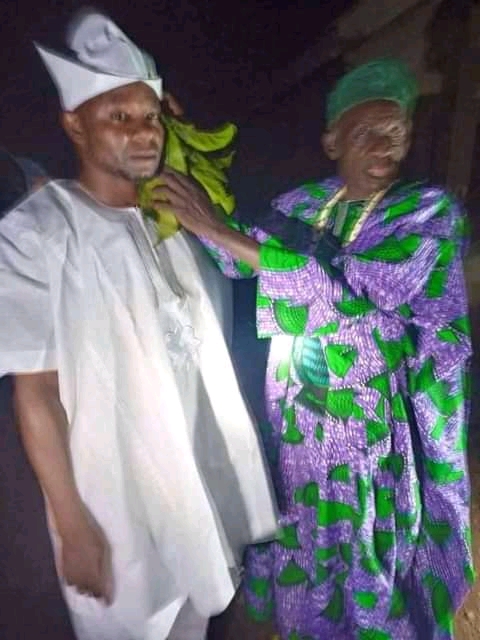 The royal crisis rocking the ancient town of Awo in Egbedore Local
Government area of Osun State, took a new twist penultimate week,
following the illegal appointment of one Taiwo Abdulrasaq Adegboye as
new Alawo by Governor Gboyega Oyetola, just as the four (4) Ruling
Houses in the town approach the Appeal Court sitting in Akure to
commit Adegboye to prison (Correctional Centre) if he dares paraded
himself as monarch in defiance to subsisting orders of the State High Court.

They insisted that Governor Oyetola was wrongly approved Taiwo Adegboye (+2348035163991) as new monarch of the ancient town of Awo
on September 13th, 2021 and Adegboye has been alleged of being a
serial forger that forged every document relating to the throne of
Alawo of Awo in his favour, which he was under criminal investigation
of the Police and State Security Service (SSS) till the time of
filling this report.

While approaching the Appeal Court sitting in Akure on Friday
September 17th, 2021 on behalf of the four Ruling Houses in Awo with
Appeal N0: CA/AK/58m/2021 on suit N0: HOS/84/2020, where Taiwo Adegboye
was an appellant, Barrister Kehinde Adesiyan(+2348033793947), a Legal Counsel, urged
the Appellate Court to uphold the preservative order of the Lower
Court by nullifying September 13th,2021, approval and appointment of
Taiwo Abdulrasaq Adegboye as new Alawo of Awo by Governor Oyetola, for
violating the order of the State High Court sitting in Osogbo.

Although, the embattled Taiwo Adegboye with his co-travelers including
four(4) officials of Egbedore Local Government, Awo and one Hamzat Abidoye Gboyelade, have been under criminal investigation at the
Criminal Investigation Department (CID) of Police Zonal Headquarters
(ZoneXI),Osogbo on the allegation of forgery and perjury of selection
documents for the throne of Alawo leveled against them by a Crown Prince of Abioye Ruling House/Compound, Awo, Prince Abubakar Adeniyi(+2347069330499), through a human rights organization(CHRSJ)
Petition Letter dated September 10th,2021 and forwarded to the
authorities of the Nigeria Police Force (NPF),State Security Service(SSS) and other concerned authorities, for proper, credible and
thorough investigation into the allegation.

Prince Adeniyi who supported the Petition with the 15 Paragraph Court Affidavit of Affirmation, insisted that every document in favour of
Taiwo Abdulrasaq Adegboye to his purported emergency as new Alawo was
fake, forged and perjury, stressing that the State Government under
Gboyega Oyetola were tricked to give wrong approval to a serial forger
to become a monarch in the State.

Adesiyan(+2348033793947),who prayed the Appeal Court to grant a
mandatory restorative order of reversal of the action taken by or the
reversal of the steps taken by the 8th and 11th Respondents in
considering, acting on, appointing, approving and or making use of the
selection/nomination of the 2nd Appellant(Taiwo Adegboye) as the new
Alawo of Awoland during the pendency of this Appeal and the pendency
of Motion on Notice for Interlocutory Injunction yet to be argued in
the lower Court after the appeal had been entered in this Court.

Also, seeking an order setting aside the said approval and subsequent
installation of the 2nd Appellant as the new Alawo of Awo which
happened at the hour of 11:15p.m midnight of the 13th of September,2021, pursuant to the approval of the 8th Respondent (Governor
Oyetola) at the State Executive Council meeting at Osogbo between
9:00p.m and 11:00p.m on the same 13th of September, 2021.

And order of Injunction restraining the 2nd Appellant in particular
from parading himself as Alawo of Awo or wears any insignia of office
including beads or crown showing or depicting his installation as
Alawo of Awo pending the determination of this appeal and the
substantive Suit at the lower Court.

They further explained that on the 2nd of September, 2020, the four
Ruling Houses in Awo, instituted an action at the lower Court to
challenge the status and qualification of the Appellant(Taiwo
Adegboye) to vie for Alawo of Awo stool which became vacant on ground
that either biologically or consaguinically, where the State High
Court granted a preservative order on 16th of September,2020, that
parties in the suit including Governor Gboyega Oyetola and his privies
including, Commissioner for Local Government and Chieftaincy Affairs, Attorney-General and Egbedore Local Government area, should maintain status quo pending the determination of the Preliminary Objection (PO)
and Motion on Notice before it.

But to surprise of other parties in the Suit N0: HOS/84/2020, some
emergency Warrant Kingmakers and two living traditional Kingmakers
claimed to be emerged on 2nd of September, 2020, the day this action
was instituted that they have selected and elected 2nd Appellant
(Taiwo Adegboye) as new Alawo of Awo, upon which Governor Oyetola
acted upon to approve Adegboye as new Alawo on 13th of September,2021.

They added that Adegboye came up with the Preliminary Objection (PO)
to the suit N0: HOS/84/2020, which the State High Court presided over
by Honourable Justice A.O. Ayoola, dismissed the application by
ordering for the accelerated hearing of the Suit because of the
importance of the matter, but Adegboye dissatisfied with the State
High Court to hear the matter because he did not want the State High
Court to expose his forgery and perjury acts in ascending the Alawo
throne by approaching the Appellate Court in Akure without filling
any brief till the present moment, which he began with the use of
political abracadabra to mount pressure on Governor Oyetola to
announce him as a new Alawo and which Oyetola conceded to approve on
13th of September,2021, because he claimed to be member of All
Progressive Congress (APC) in Egbedore Local Government area of the
State.

But investigation learnt that Taiwo Adegboye was not wise enough that
he was an appellant at the Appeal sitting in Akure, by not waiting for
the pronouncement of the appellate Court on the action he(Taiwo)
instituted against the State High Court ruling to give accelerated
hearing to mater before it, determine the authentic members of the
Abioye Ruling House/Compound, Awo, before he began to lobby Governor
Oyetola to jettison the preservative order of the State High Court and
his pending application in the Appellate Court through the State
Attorney-General, Barrister Femi Akande as 11 Respondent in his Appeal
Suit N0:CA/AK/58/2021 to pronounce him as new Alawo, adding that
Governor Oyetola accepted this trick through the State
Attorney-General and approved Taiwo Adegboye as new Alawo in flagrant disobedience to Rule of Law, and the Constitution Governor Oyetola
sworn to uphold at all times.

Earlier, another State High Court sitting in Ede, presided over by
Honourable Justice M.O. Agboola, had given an order of interlocutory injunction, on August 27th, 2020, that all the parties including
Oyetola, Commissioner for Local Government and Chieftaincy Affairs,
Attorney-General and Commissioner for Justice, Egbedore Local
Government,Awo, in the suit N0:HED/26/2020, to maintain status-quo
pending the determination of the Suit but instead to obey the order of
the State High Court, the local government officials came up with the
selection and election of Taiwo Abdulrasaq Adegboye as new Alawo in
defiance to order of the Court of competent jurisdiction on 2nd of September, 2020, upon which Governor Oyetola acted upon to appoint
Taiwo Adegboye as new Alawo on 13th of September,2021.