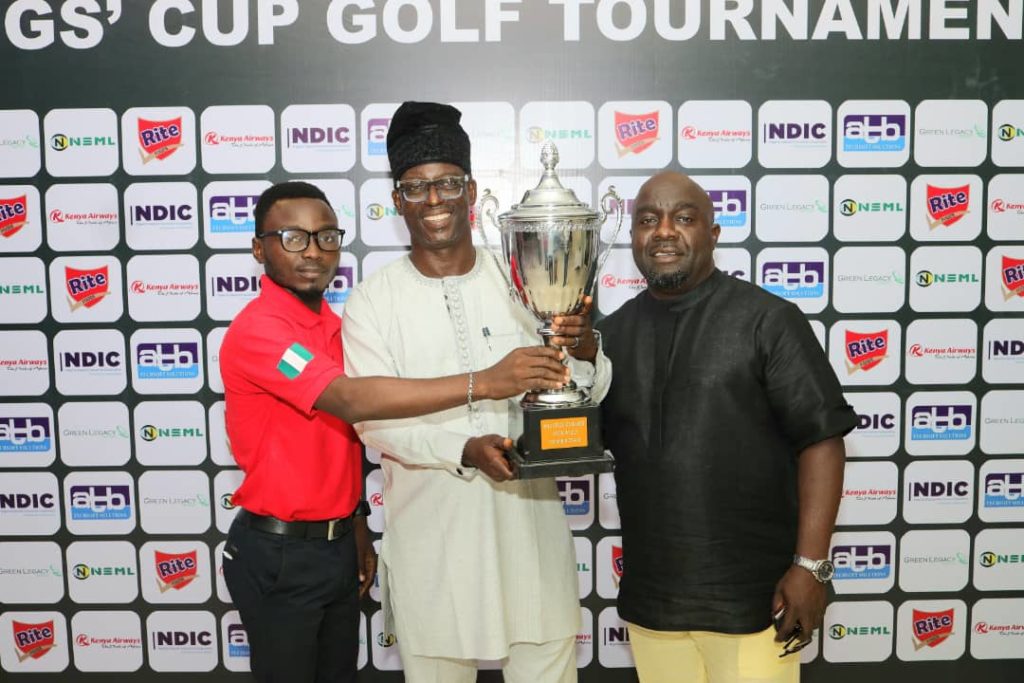 The city of Abeokuta was agog with golfers, caddies, gallery, other sports lovers and indigenes as the four kingdoms of Egbaland – Alake, Agura, Oke-Ona and Olowu engaged in a tee battle that attracted thousands of people to the second edition of the King’s Cup Golf tournament.

Bigi, Nigeria’s favorite carbonated soft drinks with twelve variants from the stable of Rite Foods Limited is the official beverage sponsor of the tournament. The soft drinks with its premium table water were readily available to refresh the taste buds and reinvigorate all golfers as well as the gallery who graced the sporting occasion that united four kingdoms on the golf course.

His Royal Majesty (HRM), Oba Saburi Babajide Bakre Jamolu II, the Agura of Gbagura Egba, officially flagged off the tournament with a striking tee shot taken at the tee box. His Majesty applauded the organizers and Rite Foods for putting the sporting tournament together to bring peace, unity and also promote tourism in the State through the game of golf.

Boluwatife Adedugbe, Assistant Brand Manager, Beverage and Bakery, Rite Foods Limited, stated that the company’s operations are centred around consumer satisfaction, and sports create a unifying platform for consumers to connect with their various brands.

“As a company, we are passionate about platforms that unite people with our brands because it helps us connect and get closer to our consumers. This golf tournament creates such a unifying platform to help us unite consumers with our brands and the Egba people, hence, the reason for throwing our weight behind the tournament,” she added.

Mr. Bukola Olapade, Managing Director and Chief Executive Officer of Nilayo Sports Management Limited, organizers of the King’s Cup Golf Tournament, Abeokuta, applauded all kingdoms represented by the teams and congratulated the winning team and most valuable golfer in the competition for their victory. Olapade lauded Bigi for providing refreshing support that energized the golfers for the tournament. He called on other organizations and stakeholders to emulate Rite Foods Limited, the leading brand that refreshes consumers all over the country.

Bigi treated the golfers to a Rite welcome and refreshing cocktail party on arrival and also provided water points and refreshment centres for all golfers and the gallery all through the tournament.

Adewale Adeogun, Chairman, Planning Committee, King’s Cup Golf Tournament stated that the committee looks forward to working with Rite Foods limited in the third edition of the golf tournament. Mr. Adeogun, who is also the captain of team Alake commended the beverage sponsor for plugging into the initiative and helping to foster unity among the four kingdoms of Egbaland while at the same time promoting tourism in the State through the sponsorship.

Bigi brought the show to a stimulating climax with a refreshing award night that celebrated the golfers. With 642 points, team Alake emerged the winner of the competition, securing the King’s Cup. Golfer Tayo Aderintan of Team Ake emerged as the most valuable player of the competition with a record of 45 Stableford points. His victory secured him an all-expense-paid trip courtesy of Kenya Airways to a choice destination.

Closest to the pin on Hole 10, was awarded to golfer Maroof Adegesin of team Owu, while golfer Linus Johnson Charles of team Oke-Ona got the longest drive on Hole 18 at the tournament.

The Stableford format scoring system was used in the tournament. It involves scoring points based on the number of strokes taken at each hole.

Rite Foods Limited has yet again delivered on its promise of refreshing all golfers, caddies and gallery that trooped to Abeokuta golf course for the King’s Cup golf tournament.