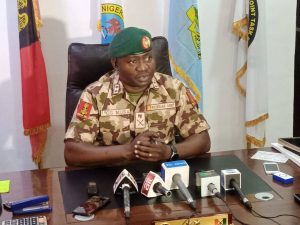 Musa said this on Friday in Maiduguri during a courtesy visit to the management of North East Development Commission.

He said those that surrendered comprised combatants, non combatants, those conscripted against their wish and family members, the News Agency of Nigeria reported.

The commander noted that the growing number of those surrendering as the military continued to profile them needed the intervention of the NEDC in the area of maintenance.

He said the development was a positive one and remained a source of concern to members of the Islamic State of West Africa Province, who he said started panicking as their hope of inheriting Boko Haram fighters dimmed.

Musa stated that the troubled ISWAP group had established a task force to stop the trend of surrendering, expressing optimism that more terrorists would surrender.

He lauded the intervention of the NEDC in areas of humanitarian and infrastructural support in the region, urging the commission to extend its intervention to the military, particularly, in the rehabilitation of structures and roads to facilitate movement.

Responding, the Managing Director of the NEDC, Mr Mohammed Alkali, lauded the role of the military in restoring peace to the region, noting that the improvement in security in the North-East had enabled the commission to embark on various projects.

Alkali, who assured the military of continuous support, urged them to sustain the tempo at this critical time of camp closure in Maiduguri and resettlement of displaced persons in their ancestral homes.