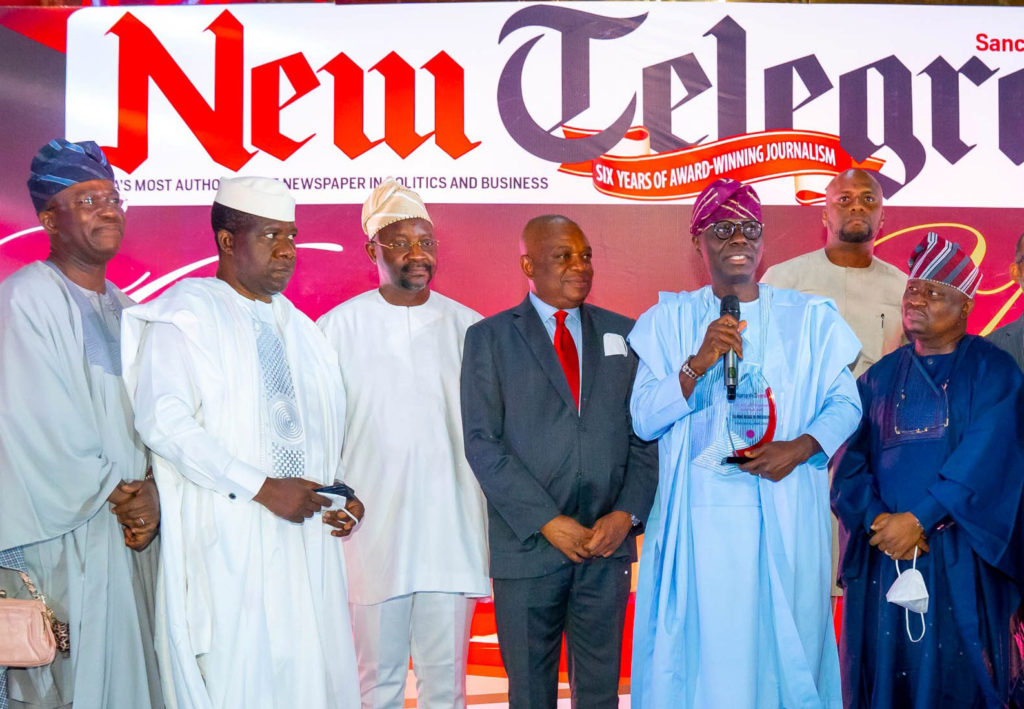 Speaking at the New Telegraph Newspapers awards ceremony held at the Federal Palace Hotel, Victoria Island on Friday night, Senator Lawan who won the Lifetime in Politics Award, said Governor Sanwo-Olu is an excellent example of what a focused administration can achieve.

“To whom much is given, much is expected. These awards certainly are meant to make us do better going forward. Our executive governors have done extremely well with very little resources. I want to commend our governors for doing so well.

“Our Host Governor (Babajide Sanwo-Olu) is an excellent example of what we can achieve in an administration that remains focused on providing development for people,” he said.

Also speaking during the event, the Senate Chief Whip and former governor of Abia State, Senator Orji Uzor Kalu, described Governor Sanwo-Olu as a man of vision he admires so much.

“On behalf of the New Telegraph Newspaper, I give this award to a man of vision; a man that I admire so much. Anytime you call him, he picks his phone. A man that knows his job. A man that can be in Ajegunle now and be in Victoria Island in the next three hours.

“A man that I see during the COVID pandemic with his Commissioner for Health running around to see that the lives of Lagosians are safe,” Kalu said while presenting the Governor of the Year in Good Governance category to Governor Sanwo-Olu.

Responding to his award as New Telegraph Governor of The Year 2021 in Good Governance, Governor Sanwo-Olu said the award is about governance and ensuring that the citizens get the desired dividend of democracy.

He said: “What New Telegraph Newspaper has done this evening is not only for me, it is not about me, it is about governance and it is about truly passing on the dividend of democracy to our citizens.

“And indeed, it is an honour and with every sense of humility, that I receive this award on behalf of the entire 22 million Lagosians who continue to support our government, who continue to see that the journey of a Greater Lagos is on course and who continue to bear with the little inconveniences of all the infrastructure we are doing. For Lagosians, who continue to believe that indeed the hope is not lost on us and have continued to encourage us to do more, to do better, and to do all things that are required.

“On behalf of all of you. I want to thank the 0New Telegraph Newspaper for this award. We have received the award and we will do more to take governance to the highest level