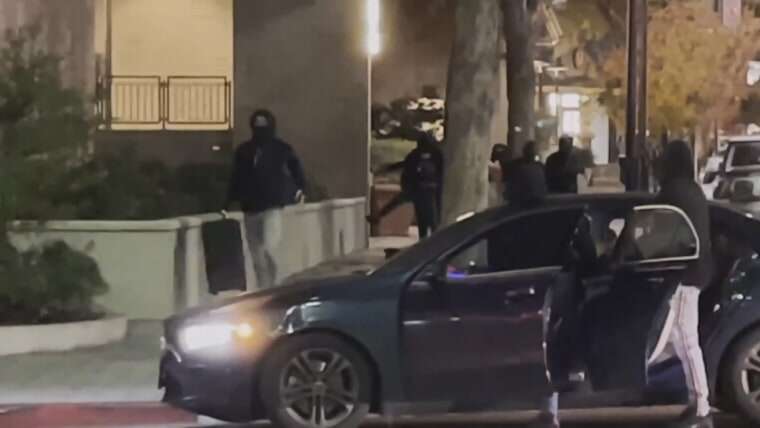 By Yuliya Talmazan and Joe Studley

Dozens of looters descended on a Nordstrom store and stole merchandise Saturday night in a raid that was over within a minute, police in Walnut Creek, California, said.

About 80 people rushed into the store in the city’s Broadway Plaza, a police spokesperson said.

The suspects were in and out of the store, which was open at the time, within a minute, the spokesperson said, adding that an undetermined amount of merchandise was taken.

Jodi Hernandez, a reporter for NBC Bay Area, was near the store when the raid took place. She tweeted that about 25 cars blocked the street.

Hernandez said it appeared that most looters got away. A video she took showed police officers arresting and handcuffing some people. An officer can also be seen pointing a weapon at one of the drivers.

Nordstrom did not immediately respond to a request for comment.

Brett Barrett, who works at a nearby restaurant in Walnut Creek, northeast of Oakland, told NBC Bay Area that he saw 50 to 80 people in ski masks carrying crowbars.

“I had to start locking the front door, the back door,” he said. “You never know, they could have come right in here.”

Three people have been arrested so far, police said. Two were arrested immediately on suspicion of robbery, conspiracy, burglary and possession of stolen property. One of the two had a firearm and faces a weapons charge, police said. A third person was found not long after the incident and also faced charges.