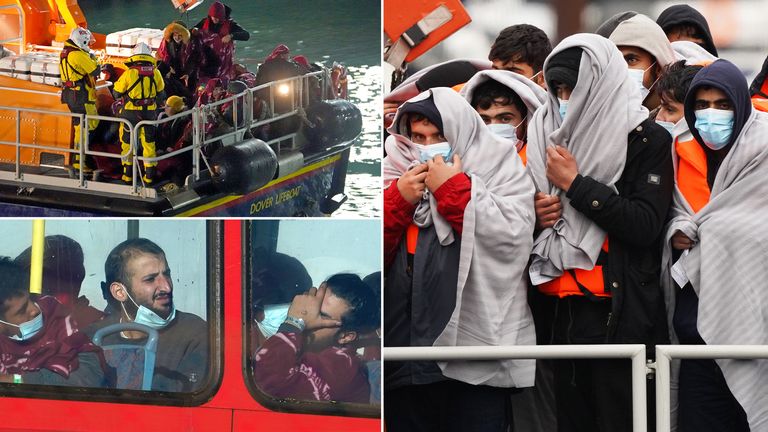 France says a fifth suspected people trafficker was arrested overnight and the boat used to try to cross the Channel was bought in Germany.

It comes as police said an adult male had been found on a beach in between Calais and Sangatte. However, it is not known if it’s connected to Wednesday’s tragedy.

A picture of the flimsy boat used by the group has also emerged – the image was supplied by a lifeboat captain.

Sky News has also obtained a mayday call by French coastguard requesting help from “all ships” during yesterday’s incident and spoken to a lifeboat man who pulled bodies from the water.

The Kurdish government told Sky News that some of the victims were Kurds and that it has appealed to the UK and EU for help stopping migrants leaving Iraq.

The two survivors were Somali and Iraqi.

Following the deadliest day of the crisis, the tensions between France and the UK were once again laid bare, with interior minister Gerard Darmanin accusing Britain of handling the situation badly.

He also said other countries such as Belgium and Germany could do more to help tackle illegal migrants and human trafficking.

However, he said by the time migrants are on the coast it is “already too late”.

Mr Darmanin also said a fifth suspected people trafficker was arrested overnight and that the boat was bought in Germany.

“Those responsible for the tragedy which took place yesterday in the Channel are the smugglers, who for a few thousand euros promise El Dorado in England. The smugglers are criminals, this tragedy reminds us, painfully,” he told RTL.

On Thursday morning, another group of around 60 migrants – some in lifejackets – were transferred to buses at Calais train station.

“Have these deaths changed your mind about getting to Britain?” Sky’s Adam Parsons asked one man. “No, no,” he replied.

Parsons said there was “still an appetite for people to try to get from here in mainland France, over to the shores of the UK”.

“And when you ask them why, they tell you that if they go through the official lines they don’t have any confidence that they will ever get the opportunity to reach the UK,” he added.

“They think they have no choice but to use people smugglers.”

Most of those attempting to cross the Channel have been helped by networks of people smugglers.

Sky News spoke to one in northern Iraq who said he had packed flimsy boats with dozens of people trying to reach Britain – aware that some wouldn’t survive.

Franck Dhersin, vice president of transport for the northern Hauts-de-France region, told France’s BFM TV that heads of human trafficking networks who live in the UK must be arrested.

“In France what do we do? We arrest the smugglers…To fight them, there’s only one way – we need to stop the organisations, you need to arrest the mafia chiefs,” he said.

“And the mafia chiefs live in London… They live in London peacefully, in beautiful villas, they earn hundreds of millions of euros every year, and they reinvest that money in the City. And so it’s very easy for the tax authorities to find them.”

Migrant crossings – what does the data show?

An image of two-year-old Alan Kurdi, who died while fleeing Syria in 2015, shocked the world and raised awareness of desperate families fleeing conflict and poverty.

But the route to mainland Europe and the UK is as dangerous as it was then.

Asked if the latest tragedy could be a turning point, Steve Valdez-Symonds of Amnesty UK said he had “little confidence” it would be.

He pointed to the deaths of 39 migrants whose bodies were discovered in a lorry in Essex in 2019 and said it was not the journey that was the issue – but the needs of the people on it.

Policing illegal routes to the UK is not sufficient on its own, he said. “Smugglers will continue to find new routes.”

This is a limited version of the story so unfortunately this content is not available.

French politician Bruno Bonnell said there were many reasons people are attracted to the UK.

“First the language, a lot of people have a basic understanding of English and they find it more comfortable finding a job there,” he told Sky News.

“Plus they have heard from sources that the conditions are better,” added the MP for Rhone.

The Dover Strait is the world’s busiest shipping lane and more than 25,700 people have completed the journey this year.

That’s three times the total for 2020, according to data compiled by PA news agency.

A government minister revealed last week that just five people had been returned to Europe after crossing the sea on small boats.

Deportations as a whole – not just for people who cross the Channel – are at a historic low.

In the year to June 2021 they decreased to 2,910 – less than half the previous year. The government blamed the drop on the pandemic.

In a statement to MPs, Home Secretary Priti Patel said the deaths were a “dreadful shock” but “not a surprise”.

She said there was “no quick fix” to such a “complicated issue”.

“This is about addressing long-term pull factors, smashing the criminal gangs that treat human beings as cargo and tackling supply chains,” she said.

More than 20,000 migrants have been stopped this year, 17 criminal groups dismantled and around 400 arrests and 65 convictions secured, she said.

“It does need a Herculean effort and it will be impossible without close cooperation between all international partners and agencies,” said the home secretary.

Ms Patel also said she had made a “very clear” offer to send personnel to France for “joint patrols to prevent these dangerous journeys from taking place”.

The prime minister, Boris Johnson, is understood to have made the same offer to French President Emmanuel Macron.

Calais MP Pierre-Henri Dumont called it a “crazy” proposal that “will not change anything” along a shoreline that stretches several hundred kilometres.

How does the UK handle immigration?

The issue has become an increasingly tense subject for the UK and France, and each side has been blaming the other.

The government has accused the French of not stepping up patrols enough, despite giving them £54m to help deal with the problem.

Mr Macron said on Thursday that he was requesting more assistance from the UK.

“We are going to ask for extra help from the British because all these men and these women don’t want to stay in France,” he said.

“We tell them they’re obviously able to do so, and there are centres in Calais and Dunkirk where they can go, but we’re going to reinforce in fact saving them at sea.”Arrests should be made before tragedies – Starmer

He said he was frustrated the arrests of the people smugglers had not been made before the deaths, and that there a “lot of serious questions to be asked”.

Sir Keir said effective action alongside French authorities and a long-term strategy was vital to tackling the crisis.