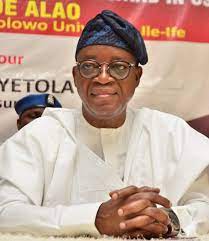 The Agbotejoye Ruling House that was supposed to fill the vacant stool of Onihunbo of Ihunbo, after the reign and demise of Oba Jacob Tolagbade Fase in 2014, has written Ogun State Government under the leadership of
Governor Dapo Abiodun, reporting the anomalies carried out by the
immediate past Governor of the State, Mr. Ibikunle Amosun and his Elder brother, Alhaji Ibikunle popularly called” *Alhaji Agba” by illegally
appointed unknown person to Agbotejoye Ruling House, one Mr. Sunday Olamide Adesiyan, a known smuggler, bunker and Land-grabber as monarch of
the ancient town.

The Ruling house disclosed that the State Government was erred in
appointing Mr Olamide Adesiyan in contrary to order of rotation as
stipulated in the registered 1956/57 Onihunbo of Ihunbo Chieftaincy Declaration, calling for immediate reversal of the unlawful and illegal
appointment of Adesiyan by the State Government.

Earlier, the Centre for Human Rights and Social Justice (CHRSJ), through
its Chairman, Comrade Adeniyi Alimi Sulaiman, has urged the State
Government of Ogun to declare the stool of Onihunbo Vacant by setting up
the Independent Panel of Enquiry to look into the remote casue of the
Obaship crisis in the ancient town created by the Ibikunle Amosun led
Government, described Mr. Adesiyan as an fake and impostor which he should
stop parading himself as monarch of the town.

It would be recalled that ancient town of Ihunbo in Ipokia Local Government area of the State has
been engulfed in Obaship and Community crisis since Friday 17th of March, 2017 at about 7.29pm when Adesiyan, Mr. Fatai Isiaka and Mr. Babajide Titus(aka-Oppressor) led 46 Armed thugs with the supervision
of men of Nigeria Police Force (NPF) coordinated by one ACP Samuel Titus
and (21) men of (192) Battalion of Nigeria Army base in Owode-Yewa, to burn down
the Onihunbo’s palace with the support of former Governor Ibikunle Amosun’s
elder brother, Alhaji Ibikunle popularly called “Alhaji Agba”.

They embarked on the illegal and brutal journey on the Chieftaincy matter
then as part of their efforts to impose Adesiyan as Onihunbo through
backdoor, forgetting that power was transient in person’s life and
believing
that they have the backing of the then Governor Ibikunle Amosun who has
immunity to do anything as they wanted then.

It added that immediately they burnt down the Onihunbo’s palace, they
turned
Adesiyan’s private residence to the palace where they made him(Adesiyan)
illegal monarch and this was against the Yoruba tradition and customs on
traditional institution.

It alleged that the perpetrators of the evil and dastard act against the
innocent citizens of the Ihunbo Community have been striving hard to
pervert the cause of justice on the matter, reinstating the call for their
immediate arrest and subsequent prosecution.

According to Agbotejoye’s Lawyer,” It is our firm blief to refer to the
unlawful and defective process leading to the invalid declaration,
selection, appointment and installation of a candidate from ‘Inakankan’ Ruling House as Onihunbo upon the demise of Oba Jacob Tolagbade Fase
from Osupa Ruling House in year 2014 and we have the authority and
instruction of our client to put the State Government on notice in
accordance with Section 23 of the Chiefs Law of Ogun State,2006″

The Letter dated 13th of October, 2021 and signed by Barrister Akinlaja Ola Ogunnaike of Brainfield Law Chambers, noted that the Kingmakers and
Palace Chiefs wrote to our client asking Agbotejoye Ruling House, to
present a candidate for the stool of Onihunbo and Agbotejoye Ruling House
presented a crown Prince, Alani Olaniyan to the Ihunbo Kingmakers for traditional rite of installation as Onihunbo of Ihunbo.

The Letter read thus, “However, some powerful individuals with tatics
support from political circles apparently with financial advantage
conspired together to deprive our client of their traditional, customary
and lega rights bestowed on Agbotejoye Ruling House by inheritance.

“These manipulators schemed and perfected their agenda with the aid of
falsehood, fraud, misrepresentation of facts, threat, violence, and use of force.

It was alleged that our client waived the rights of Agbotejoye Ruling
House to produce Onihunbo vide a fraudulently procured and forged
letter.This said letter did not emanate from any member of Agbotejoye
Ruling House.

“We wish to state emphatically that Agbotejoye Ruling House, made
painstaking efforts to put forward through several and diverse means the
protestations and objections of the Ruling House to Declaration, selection
and appointment of another Ruling House to ascend the throne of Onihunbo
when it is legally, traditionally and historically the turn of our client
to produce Onihunbo of Ihunboland.

“We wish to state further that the purported declaration, selection,
appointment and installation of a candidate from another ruling House, that
is Inakankan Ruling House, contrary to the order of rotation stipulated in
the Ihunbo Chieftaincy Declaration of 1956/1957, is invalid, null and void
abinitio”.

The Letter submitted that, “Please note that if the process leading to the
declaration, selection, appointment and installation of a candidate from
Inakankan Ruling House, is not revisited to redress the grave injustice
done to AGBOTEJOYE Ruling House, we are prepared to seek redress on behalf
of our client in a Court of competent jurisdiction for the deposition of
the person illegally occupying the throne of Onihunbo and ensure that all
the rightful entitlements due to our client under the law and tradition are
fully restored without any further delay”.

For Confirmation of the Story