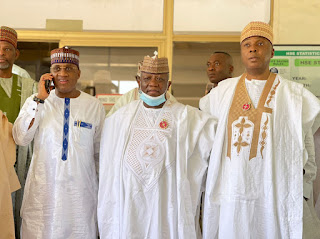 A factional leader of the All Progressives Congress in Zamfara State, Senator Kabir Marafa, has said he will remain in the party despite attempts to frustrate him out.

Marafa stated this during a telephone interview with our correspondent on recently.

He was reacting to insinuations that a former Senate President, Bukola Saraki, was trying to woo him and former Zamfara State governor, Abdulaziz  Yari, to the Peoples Democratic Party.

The senator, who represented Zamfara Central Senatorial District in the 8th National Assembly, said he met with Saraki in company with Yari, but that the occasion had nothing to do with defection to the PDP.

Marafa said, “The former Senate President was going to Kaduna for a wedding and he called me to join him since he knew that I am based in Kaduna.

We actually flew into Kaduna together because I was in Abuja when he called me.

“The former Senate president was my boss. He wanted me to accompany him to the wedding organised by a spiritual leader.

“The cleric gave out his daughter out in marriage yesterday (Friday), and he invited Saraki and Yari, but I was not invited.”

Asked if Saraki tried to woo him to defect to the PDP, Marafa said, “Can somebody woo me to the PDP?”

He added, “I don’t need to be wooed; if I want to join the PDP. I will do so without anybody influencing me.

“I participated actively in the building of the APC as a critical stakeholder. I was a sitting senator then.

“I am a senior engineer in the team that built the APC. I will therefore not abandon my house to bricklayers, plumbers, electricians, and others who were mere Iabourers when the construction was going on.