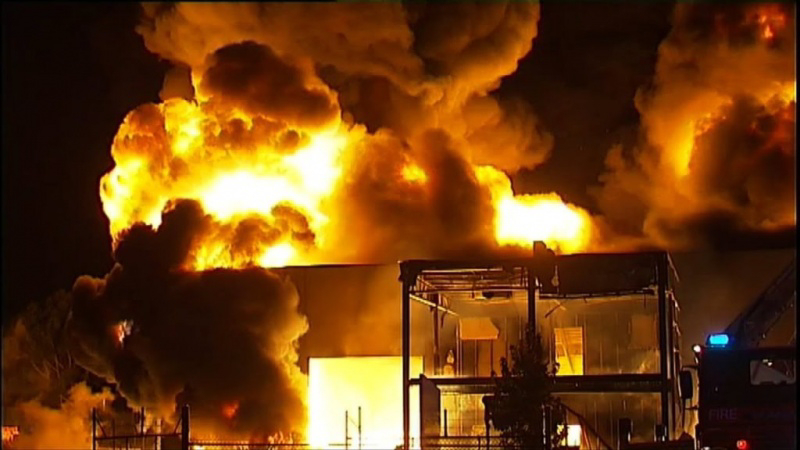 The proposed Kano State Secretariat of the Ahmadu Zago faction of the ruling All Progressives Congress (APC) recently confirmed as the authentic one by an Abuja High Court has been burnt down.

The building, which serves as the campaign office of Sen. Barau Jibrin, a governorship hopeful and an arch-opponent of Governor Abdullahi Ganduje, was razed to ashes on Wednesday night.

Reports say over one thousand hoodlums attacked the campaign office located around Maiduguri Road and owned by Alhaji Musa Gwadabe, a former Labour and Productivity Minister, setting it ablaze before proceeding to Gyadi Gyadi Quarters.

The State Police Commissioner, Ismaila Dikko, confirmed the incident, saying his me have taken over the area for assessment.
“We are already in control of the situation, and my men have fully taken over the place investigating what happened”, the police chief explained.
Politics in Kano is getting hotter especially after the declaration of an Abuja High Court annulling the elections of the Governor’s APC leadership under Alhaji Abdullahi Abbas.
On Tuesday, men of the state revenue office locked up the office of the lawyer of the House of Representatives member, Shaaban Ibrahim Sharada, Barrister Ibrahim Jimoh SAN, who secured victory against the state in the APC Congresses crises.
They accused the owners of the six-storey building housing Jimoh’s office of not settling N3 billion tenement rent, a reason they said they padlocked the place. (Adapted rom a Daily Post report)