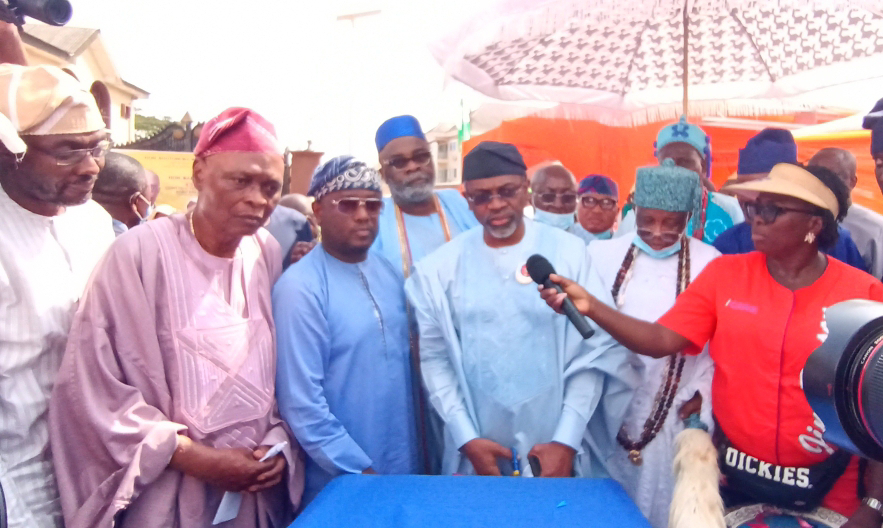 Speaker of the House of Representatives, Rt. Hon. Femi Gbajabiamila, has commissioned multiple road projects in Ikorodu, Lagos State, describing his representative, Hon. Babajimi Adegoke Benson, as a man who represents hope for the people of Ikorodu federal Constituency.

“I feel very pleased that you are instilling in the people what purposeful leadership is about, with your performance in Ikorodu, from what we are seeing, there is a future for the people of Ikorodu federal Constituency, there is hope for Lagos and Nigeria at large,” the Speaker House of Reps. stated.

He continued, “I consider road infrastructure as the most important for our people. I want to thank you (Jimi Benson) for changing the story of residents where these roads are constructed, because roads attract development as we can see.

“I have seen the pictures of how the roads were before, and how it is presently. The roads were not tarred before, which was difficult for people to drive nor walk on smoothly. Now, the roads were tarred with streets light.

“As an adage says, to whom much is given, much is expected. Jimi Benson will continue to make you proud in Ikorodu Division as he’s doing us proud in the House of Representatives. So, we must continue on the part of excellence.
“I want to thank the people of Ikorodu for

will definitely go down. So, the community should take ownership while the local government should make sure that the roads are well maintained has promised,” Benson added.

In his eloquent remarks, the Lagos State APC Chairman, Cornelius Ojelabi, appreciated Babajimi Benson for his uncommon achievements, saying he had been used to prove the dividend of democracy to the people of Ikorodu, and by extension, assisting the All Progressives Congress, APC, with the support of the Speaker, Federal House of Representatives, Rt. Hon. Femi Gbajabiamila.

He urged all to revalidate their voter’s cards at the nearest INEC Office, so that laudable projects like this will continue in our community, MegaXpression Media reports.

Also, the Apex APC Leader in Ikorodu Division and Member, Governance Advisory Council, GAC, Asiwaju Olorunfunmi Basorun, in his remarks equally appladed Hon. Benson for his quality representation, and moved motion for his third term in 2023, which was seconded by the Chairman, Imota LCDA, Omo’ba Wasiu Agoro and overwhelmingly endorsed by all.