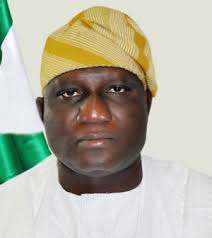 In the interview, Lasun, as he is popularly called, spoke of many issues including but not limited to how he parted ways with former Governor of the state and Minister of Interior, Ogbeni Rauf Aregbesola over the latter’s commitment and loyalty to anything that has to do with the National Leader of the All Progressives Congress (APC), Asiwaju Bola Ahmed Tinubu.

The Gazelle News.com presents excerpts from the interview for our readers’ Sunday delight.

Why are you challenging the incumbent and embarking on this journey the second time?

I don’t know what you mean by challenging, because in 2018, I came out to contest for the same seat and I actually started my campaign in 2017.

Since you belong to the same party with the current governor many people interpreted it as a challenge. It is assumed in Nigeria political setting once you are a sitting governor, you have a first right of refusal.

You are talking about right of refusal without being circumspect and I don’t know if that one can succeed here. Don’t forget that I contested in 2018 and I actually came second in the primaries. And since that time nobody has spoken to me until about three months ago. Even people are asking me if I am still in the party, or whether I am still in politics and if I am still interested in  contesting.

My own objective: I grew up in Osun, had all my education in Osun except when I did my A-level in Ondo. I studied briefly at University of Ibadan before I transferred my studentship to the Obafemi Awolowo University, Ife. I know Osun very well and I know I can change things. I am completely an Osun person and some of you will bear witness of one or two things that we did. I did not do it because of politics I am doing what I am doing in Osun  because and I am from there. Nobody will come and do it for you. If you see a stranger coming to do something for you in your environment, he probably came to exploit something from you which you don’t know at that time. I want to see Osun state to be an industrialized state in the next 10 years which is possible. See what Dubai achieved within the space of 50 years.

If the Osun people give me their mandate and I become Governor, I can assure you I will industrialize that place and in fact in eight years, I will create a trillion naira economy hub.

While speaking with journalist in Abuja when you picked your nomination form, you said nobody born of a woman can do to you what they did in 2018; many said your statement confirmed that your party rigged the Osun Governorship election in 2018?

I said the primary of the governorship was rigged, they ganged up against me. That was the part I said they didn’t win. That I said nobody born of a woman, people know me that I am not a violent person, I don’t use thugs to do election. At times people wondered if I am a serious politician, what I am saying is that if anybody tries to rig this election, the person will be judged by God. That is the interpretation of what I am saying don’t read meaning into what I said.

We can’t continue to be rigging election in Nigeria without being  able to deliver what you are supposed to deliver to the people, we will definitely meet God somewhere.  I don’t do violence and I don’t use thugs to do election I am an easy-going politician and people know me. Go back to my antecedents, what I said is that if you are born of a woman why do you want to be a nuisance. You are a nuisance if you disrupt election, you are a criminal if you rigged election why don’t you allowed a fair play ground.

In the little time I spent here I know people who do bad things face repercussions, generations also partake in it. When (Adams) Oshiomohole came to do election in Osun (State), you know I said it that day that the man wants to destroy the party and I said I am not going to leave the party. If the party is going to collapse, it is going to collapse on all of us. You don’t need to disrupt other people’s job, do your own and leave. One of the problem of Nigerian politicians is that we rigged election to get to power and when we get there, we are confused.

But the claim is that you said your party didn’t win the election against PDP.

I am an APC member and nobody can claim APC more than me because this is a party we founded together. However, I was treated like a pariah. I was the Deputy Speaker (of the House of Representatives). I was treated like a pariah, the whole state ganged up against me and I never bothered for one moment. I still stayed within the party, I contested governorship election primaries, the election was rigged, I spent money, yet I didn’t leave the party. Recently they conducted state and ward Congress, nobody called me to it. I am still in the party so nobody can claim that he is more APC than me.

Let us go back in 2018, was there an inconclusive election? Should there be a re-run? Why would people be reading meanings into what I said, something that everybody knows. Remember, the President even said that in Osun, we won by remote control.

Did you feel you are cheated out of the primaries?

Not feel I was cheated. We were to do a primary, they shifted the date about three times. At the third time, they said the committee will come to Osun on a particular date.

The committee chairman was Senator Yari, former Governor of Zamfara State. We did not see committee Chairman and members until about 3pm on Thursday when there was going to be a primary election on Friday by 8am. People called me that I should not take part in the exercise that I was going to be rigged out but I have made up my mind. Senator Yari as the Chairman of that committee didn’t come to Osun. People should go and find out why, Senator Ovie Omo-Agege turned himself to the chairman of the committee overnight because he is acted in that capacity. He spent several hours in ilobu and conducted election in just two wards and filed the result.  If they want to take me on this, they just want to destroy the party. Senator Omo-Agege signed the results but because of the kind of person I am, I did not go to court.

They concocted results. The thing was rigged. Don’t forget the issue of direct and indirect primaries started with Osun election. Ovie Omo-Agege has been compensated for that singular act and I hope he would be careful with what he would want  to say about me because I have those results he signed.

Many groups have endorsed Gov Oyetola is that not a threat to your own ambition?

They have the right to endorse. I am not going to fight anybody.

The party excos are with the Gov, if it is either indirect or direct primary, how sure are you of winning? I

Im confident that by the special grace of God in 2022, I will be gov in Osun. I know God will support me.

Do you have the support of some of the bigwigs in the party?

Of course. I go out a lot and people come to speak with me. I know I am one of the few appropriate qualified aspirants for the seat. We are the ones that can deliver.

People called me everyday to ask me questions and challenge me that we are keeping quiet and I always tell them I am not keeping quiet as an individual when the time is right I will do what is supposed to be done. And that is what I have just done by collecting the nomination form. It is journey I will pursue to the end. Some of us established the modern day progressive party in Osun. We fought for it with our blood and sweat the journey has been tortuous and painful I can’t run away at this point.

In the quest for claiming Osun for Progressives, Gov Rauf Aregbesola did very well and we all fought the battle together in 2004 till November 26, 2010 when we were declared winner at the Appeal Court in Ibadan. He led from the front.

When I remembered all what Aregbesola did to get Osun back to the Progressives, he is a fantastic human being. Whether we are on the same page or not what I know is that Aregbesola did three things to me. We had our differences, he fought me and I never leave him because he told me when he wanted to fight me. When I wanted to become Speaker (of the House of Representatives), I informed him and he accepted initially.

Two days later, he said we may not able to go forward with my ambition because Asiwaju Tinubu will likely support Femi Gbajabiamila. He said any time he is to choose between two people and Asiwaju is involved he will always go with Asiwaju. He said if I go the way I  want to go, we may likely part ways and we did parted ways because of that. That is the only loyalist of Asiwaju that I know. He said if you don’t listen to me, we will part ways because I can never negotiate my relationship with Asiwaju.

He called me sometime again that Asiwaju is sick let us organized prayer for him. We were organizing prayer everyday for him. If today they are fighting it is none of my business. Rauf Aregbesola has sacrificed the relationship that I have with him for that group. I consider him my senior brother, he is my friend and confidant.