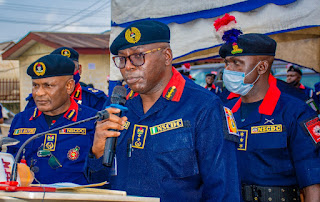 In line with the Corps’ core mandate, the Commandant General of the Nigeria Security and Civil Defence Corps, Ahmed Abubakar Audi, has again charged the NSCDC Anti-vandal Squad to be dogged and resilient in the fight against vandalism of petroleum pipelines and other National infrastructure assets across the Country.

This statement was released to press by the director of public relations in the NSCDC headquarters, DCC Olusola Odumosu,

Audi hinted that his visit is predicated on the order of the Mr President to speak the language vandals and other criminal elements in the country understand by launching a formidable and aggressive action to rescue our economy from the hands of all economic saboteurs and other enemies of Nigeria.

The CG reiterated that the service will continue to deal decisively with any individual or group of persons intending to tamper with our collective wealth, assets and infrastructure while also working in synergy with other sister security agencies and law enforcement agencies to restore the hope of Nigerians in the current administration effort to provide security for all and sundry.

While parading the suspects,the CG commended the existing synergy and collaborative efforts of the NSCDC, the Nigerian Navy, Nigerian Army and other sister agencies in the arrest of 40 suspected oil thieves, 10 Trucks, 9 Boats, 69 Jerry Cans / Drums 100 Petroleum Pipes and 83 Sacks filled with suspected adulterated petroleum products in different parts of Rivers State.

He commended the officers and men of the state for their levelheadedness, dedication to duty and comportment; stating that the number of arrests made so far is highly and equally charged them not to relent in the fight against vandalism and illegal dealings in petroleum products.

“The war against oil thieves and economic saboteurs cannot be compromised because oil is the mainstay of our economy, we must remain firm and resolute in Safeguarding all Critical National Assets and Infrastructure. Do not be detered; the nation is loosing a lot by the nefarious activities of these saboteurs; the war must therefore be taken to their camps and we must overcome” Dr Audi said.

He added that other items recovered from the suspects includes: Seven (7) Pumping Machines, Seven (7) 40HP Yamaha engines, One (1) 90HP Yamaha engine and several hoses used for syphoning AGO. The arrested suspects are currently undergoing thorough investigation and would soon will be appropriately charged to court.

The CG therefore charged every good spirited Nigerians to report any strange movement, suspicious individuals and activities to the nearest security agency for prompt action so that the country can be rid of all dangerous elements amongst us.