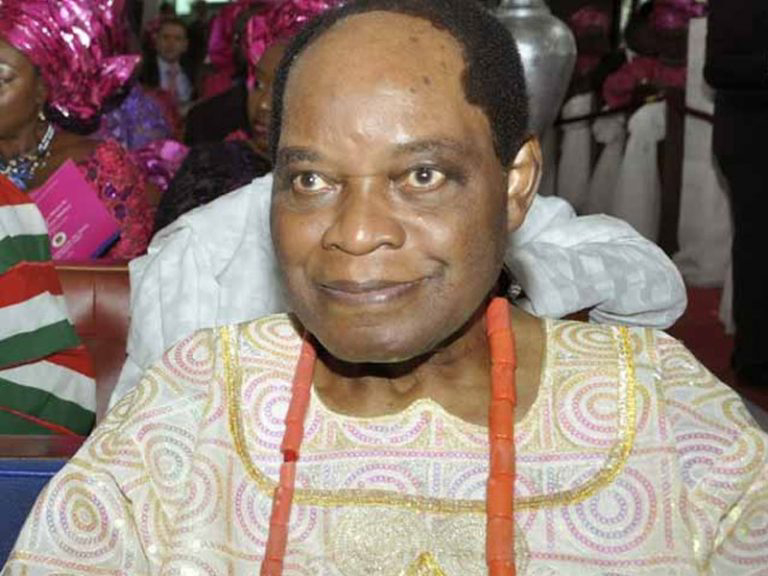 The no-nonsense managers of Access Bank led by Hubert Wigwe have gone after the properties of Late Chief Sony Odogu over a debt of 50 billion naira.

We gathered reliably that the debt was originally over 26Billion but since 2015, it has spiraled up to 50Billion and the managers of the bank have commenced the process of getting every penny of the depositor’s funds from the Late Socialite family.

For some time now, the families have been playing hide and seek with the bank but at the weekend the bank moves to seize some of the assets in Ikoyi Lagos.

Access Bank Plc last week commenced the process of recovering the outstanding sums due it from a total of over N50 billion judgment debts in its favor against the late Chief Sunny Odogwu and two of his companies – Robert Dyson & Diket Limited and SIO Property Limited.

The said judgment debt was in respect of a property situated on No. 31 – 35, Ikoyi Crescent, Ikoyi, Lagos State, known as Luxury Collection Hotels and Apartments (formerly Le Meridien Grand Towers).The said property owned by SIO Property Limited of which the late Odogwu was the majority shareholder, was financed with a loan from the then Diamond Bank, which is now Access Bank.

Justice Saliu Saidu of the Lagos Division of the Federal High Court in suit number: FHC/L/CS/1633/14, had in November 3, 2015, found the late Odogwu and his companies guilty of breach of Bank-Customer Relationship and consequently ordered the sale of the property used as collateral for the loan sum of N26,229,943,035.22.

However, with a 20 per cent interest on the N26 billion judgment debt in the last six years the judgment was delivered, the total debt has now reason to over N50 billion.

The bank had in 2014, commenced legal action against the defendants at a Federal High Court, Lagos, following the failure of the defendants to meet their loan obligations granted in the financing of the Le Meridien Grand Towers, known as Luxury Collection Hotels and Apartments.

Plaintiff in arguing its case had placed plethora of evidence before the court on how it granted various credit facilities to the 1st and 2nd defendants to finance the construction of the Luxury Collection Hotels and Apartments.

Plaintiff added that the various facilities were at various times restructured to ease the repayment of the loan facility but the 1st to 3rd defendants continue to refused or failed to meet their obligations, stating that the project site located at 31-35 Ikoyi Crescent, Ikoyi, Lagos and the Personal Guarantee of the late Chief Sonny Odogwu were used as collaterals for the facility.

“Whether having regard to the failure, refusal and or neglect of the 3rd defendant to execute the deed of personal guarantee as agreed as agreed with the plaintiff on November 19, 2010 as part security of the cumulative sum of facility advanced to the 1st to 3rd defendants for the project at 31 -35 Ikoyi Crescent, Ikoyi, Lagos State which now stands at N26 billion as at September 30, 2014, order an order of specific performance can be made to compel the 3rd defendant to execute the said deed of personal guarantee in favour of the plaintiff within two days of this court.”

Delivering judgment in the suit, Justice Saidu held that the first to third defendants were in fundamental breach of the contract for the financing of the construction of the Luxury Collection Hotels and Apartments, having admitted “Indebtedness to the plaintiff in the sum of N10, 252,315,567.28 on the project finance facility as at December 20, 2011.”

The judge stated that where there was an admission of indebtedness by a party, the court could make an order for the sum admitted to be paid.

“The following is very clear from the totality of evidence before me; that there are facilities granted and disbursed….the facts of these facilities were admitted in paragraphs 8, 10, 11, 13,14, 15, 16 and 17 of the counter affidavit.
“I have not seen anywhere in the pleadings of the 1st to 3rd defendants that they did not enter the contract as shown in exhibit DB3 with the agreed collateral being a third-party legal mortgage on the parcel of land located at No 31 – 35 Ikoyi Crescent, Ikoyi, Lagos State”, the court held.

In addition, the judge said the first to third defendants have not produced before the court any evidence that any of the conditions for the grant of the facility was waived or demonstrated to the court how they liquidated their indebtedness.

“With all the facts before me, I am satisfied that the first to third defendants who have admitted indebtedness has not shown how the indebtedness was liquidated.

“This court therefore has the power to grant an equitable relief of specific performance against the 1st to 3rd defendants to do what they have agreed to do by the contract”, he added.Justice Saidu accordingly made the following consequential order: “

“That leave is granted to the plaintiff to foreclose and sell the said property situated at 31 – 35 Ikoyi Crescent, Ikoyi, Lagos and to deposit the proceed of the sales into the 1st defendant’s account kept with the plaintiff towards the partial satisfaction of the judgment sum against the 1st to 3rd defendants.

“That leave is granted the plaintiff with the supervision of the Court’s Registrar to sell property situated at No 31 – 35 Ikoyi Crescent, Ikoyi, Lagos being the security for the sum of N26, 229,943,035.22 advanced by the plaintiff to the 1st to 3rd defendants for the development of the project called Luxury Collections Hotels and Apartments, the repayment of which facility, the 1st to 3rd defendants have failed, refuse otherwise neglected to make despite several demands.

“The 3rd defendant is hereby ordered to execute the said deed of personal guarantee of the sum of N26, 229,943,035.22 in favour of the plaintiff within 30 days of the judgment of this court.”

The judge in addition restrained the 3rd defendant from disposing, selling or alienating any of his personal assets, money, shares, stock and any of his negotiable instruments until the sum of N26, 229,943,035.22 owed to the plaintiff by the 1st to 3rd defendants is fully paid.

The court also ordered the sixth defendant to pay to the plaintiff the sum of N49 million being money it had and recovered for a consideration that as failed.

The sixth defendant was further ordered to surrender all the title documents in its custody in relation to the said property and other documentation connected and or pertaining to the extant transaction of which the plaintiff is the beneficiary.

Not satisfied with the Judgment of the Court, the Defendants appealed to the Court of Appeal in Appeal No. CA/L/1151/2015, but while the case was pending at the Court of Appeal, the late Chief Sonny Odogwu died, and his numerous children attempted to dissipate the various assets charged to the bank including the property located at 31-35 Ikoyi Crescent, Ikoyi, Lagos that the Court has ordered to be sold.

They have resorted to dissipating the assets which were pledged to the Bank and have breached the consent judgment made by the Federal High Court.

For instance, under the consent judgment, the defendants were required to sell the property in Los Angeles, USA within 60 days from 30th of May, 2019 or otherwise assign their interest in the property to the Bank.

The defendants have failed to meet this condition and have rather compromised their interest in the property without regards to the consent judgment.

Subsequently, the bank as beneficial owner under the Judgment has taken steps to sell the property situate at 31-35 Ikoyi Crescent, Ikoyi, Lagos to a new owner.

Unfortunately, the beneficiaries of the estate of the late Odogwu and other unknown persons who have been parading the property have promised to disrupt any takeover of the property.

Based on the foregoing and to safeguard depositors’ funds, the bank is determined to recover the outstanding sums due from the defendants and enforce the judgment of the Federal High Court.