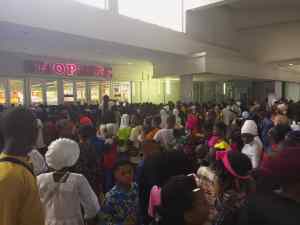 Undisclosed numbers of customers were today, Sunday, rushed to the hospital, as a result of stampede at ShopRite, Palms Ota, around Tollgate.

When People & Politics visited the mall, uncontrolled crowd of different categories were seen within and outside the premises in large numbers.

At the entrance of the main hall, hundreds of people were locked outside because of the incident recorded.

In a chat with some of the people within the premises, they told People & Politics that the experience of the day was a nightmare and demotivating.

“Naturally, this ShopRite is always crowded and I don’t get encouraged coming here at all. The fact that it’s even a festive season gave a multiplier effect. And in a situation like this, you don’t even know who is who.

“Some came here with genuine motive, but when you look around, you will see some suspicious faces”, a displeased customer said.

It was also observed that Covid-19 protocols were defiled by almost all, as people go about without putting on their nose mask.