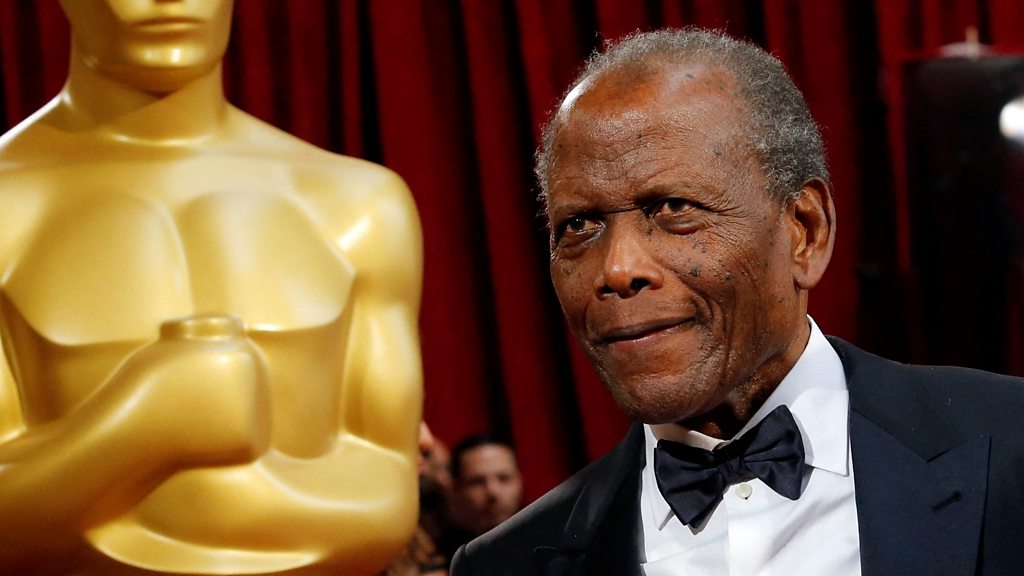 Sidney Poitier, the first black man to win a best actor Oscar, has died at 94.

The Hollywood star’s death was confirmed to the BBC by the office of Fred Mitchell, the Bahamas’ minister of foreign affairs.

Poitier was a trailblazing actor and a respected humanitarian and diplomat. He won the Academy Award for best actor for Lilies of the Field in 1963.

He added that the actor revealed “the power of movies to bring us closer together” and “opened doors for a generation of actors”.

US broadcaster and journalist Oprah Winfrey also paid tribute, saying: “For me the greatest of the ‘Great Trees’ has fallen,” adding the actor “had an enormous soul I will forever cherish”.

And the actor and Academy Award winner, Denzel Washington, said: “It was a privilege to call Sidney Poitier my friend. He was a gentle man and opened doors for all of us that had been closed for years. God bless him and his family.”

Born in Miami, Poitier grew up on a tomato farm in the Bahamas and moved to New York aged 16.

He signed up for a short stint in the army and did several odd jobs while taking acting lessons, en route to becoming a star of the stage and screen in the 1950s and 60s.

Poitier broke racial barriers in Hollywood. His appearance in The Defiant Ones in 1958 earned him his first Oscar nomination – in itself a historic achievement for a black man in a lead category at the time.

Five years later he went one better, taking the glory for Lilies of the Field, in which he played a handyman who helps German nuns to build a chapel in the desert.

Speaking on a live Facebook stream on Friday, The Prime Minister of the Bahamas, Philip Davis said: “Our whole Bahamas grieves. But even as we mourn, we celebrate the life of a great Bahamian.”

He added: “His strength of character, his willingness to stand up and be counted and the way he plotted and navigated his life’s journey.

“The boy who moved from the tomato farm to become a waiter in the United States, a young man who not only taught himself to read and write, but who made the expression of words and thoughts and feelings central to his career.”

The actor was a regular on the big screen at a time of racial segregation in the US, appearing in a Patch of Blue in 1965, and then Heat of the Night the year after, followed by Guess Who’s Coming to Dinner, playing a black man with a white fiancée.

In Heat of the Night he portrayed Virgil Tibbs, a black police officer confronting racism during a murder investigation.

His other classic films included The Blackboard Jungle and A Raisin in the Sun, which he also performed on Broadway.

He went on to direct a raft of films, and a Broadway play about life and career was announced last month.

Empire magazine’s Amon Warmann told the BBC: “He was a pioneer, he’s so influential and paved the way for so many in the industry to make their own mark, not least Denzel Washington, who paid tribute to him when he won an Oscar.”

Washington, who won an Oscar in 2002 on the same night Poitier won an honorary Oscar, joked as he said: “Forty years I’ve been chasing Sidney and what do they do – they go and give it to him in the same night.”

Warmann added that Poitier “tackled racism head on” in his work but was also “so versatile”.

“He really helped change the game for how black actors were viewed at that time [of his Oscar win]. He was one of the biggest stars during that period.”

Viola Davis, the first black American to win an Oscar, an Emmy and a Tony Award, said: “No words can describe how your work radically shifted my life.”

The Oscar winning director Spike Lee took to Instagram to celebrate Poitier’s legacy, calling him “A Proud, Dignified, Handsome And Strong Black Man That We See In Our Communities All The Time But Now Burst And Burnt Through The Silver Screens Of Hollywood”.

Star Trek actor George Takei paid tribute, calling the actor “a trailblazer who will be mourned by so many for whom he opened the very doors of Hollywood”.

And the director, Sir Steve McQueen, called Poitier “an icon to the Black diaspora”.

Actress Whoopi Goldberg quoted the lyrics to the song To Sir With Love, which soundtracked Poitier’s 1967 film. “He showed us how to reach for the stars,” she noted, while actor Joseph Gordon-Levitt called him an “an absolute legend”.

In an interview in 2000, Winfrey put it to Poitier that, as producer Quincy Jones had noted, he had “created and defined the African-American in film”.

“It’s been an enormous responsibility,” Poitier replied. “And I accepted it, and I lived in a way that showed how I respected that responsibility.

“I had to. In order for others to come behind me, there were certain things I had to do.”

Author and historian Donald Bogle spoke in a Turner Classic Movies YouTube film about the heights the actor reached during his career.

“Poitier in the 60s is this big star and he’s the only dramatic black actor who works continually in these leading roles and he has big films,” he said.

Screenwriter Richard Wesley added: “At that time, there was a social need for a character like Sidney Poitier. The social changes that were being wrought by the civil rights movement were demanding a different kind of conversation, interaction and introspection on the part of black and white people in America at that time.

Meanwhile, the former Disney CEO, Bob Iger, paid tribute to Poitier as “the most dignified man I’ve ever met”. Poitier served on Disney’s board of directors from 1995 to 2003.

Poitier became the first black actor to receive a life achievement award from the American Film Institute in 1992.

Five years later, he was appointed the Bahamas’ ambassador to Japan and he received a knighthood from the Queen in 1974.

As a Bahamian citizen he was eligible for a substantive knighthood, but given he was a US resident and Bahamian by descent the Bahamian authorities preferred it to be an honorary award.

He was married twice and had six children.