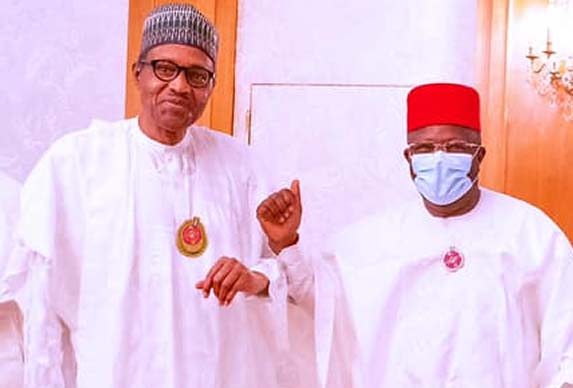 …Nigerian youths will only reckon with zoning by age, not region — Yahaya Bello’s support group

Barely twenty four hours after the National Leader of the ruling All Progressives Congress (APC), Bola Tinubu, declared his interest to contest in the 2023 presidential election, more aspirants have emerged.

Recall that Nigerian NewsDirect reported that the APC National Leader briefed President Muhammadu Buhari on Monday in Abuja about his intention to succeed him in 2023.

The Ebonyi State Governor, who met with President Buhari on Tuesday to announce his intention to steer the wheels of the nation as the president, expressed confidence in his ability to replicate, at the federal level, the feats he accomplished as governor if given the opportunity.

When asked in an interview if he was the President’s favorite for 2023 election after meeting with the president, Umahi said, “Mr president is a father. He believes in giving everybody equal opportunity to exercise interest, and so I am sure we will expect Mr president to be a man of integrity.

“He told me people who have to run for the president must consult widely and, of course, he told me stories of the numbers he met and with determination and God’s will, God brought him at a very critical period of the Nation’ challenges.”

Umahi also noted that the presidency should not be a matter of ethnicity or region, adding that Nigerians need someone who is inclusive and has the right attitude and character.

According to him, a person who will look at the entire country as his own constituency will be a plus for the unity of Nigeria.

He said, “I can’t deny the fact that there is a lot of sentiments to our people for inclusiveness in the politics of Nigeria, but the truth remains it is not going to be by force. It has to be by dialogue, by persuasion, and by sitting down with leaders of the country and making them to see reason. It is important that we don’t frighten any section of this county.

“It is not the Igbos that will decide who is going to rule the country. Nigerians are the ones to decide who will rule the country, and when people say the Igbo should come together, that is already a minus for the Nigerian society and project. The project in view is Nigeria, and not whether there are twenty people from the South-East or not. This shouldn’t undermine the chances of getting someone from the South East if it is the wish of Nigerians,” he added.

On his part, the Senate Chief Whip said he has all it takes to contest the All Progressives Congress (APC) Presidential ticket with Tinubu if the party zones it to the South-East region.

Noting that he has nothing against Tinubu’s aspiration in an interview on Tuesday, Senator Kalu maintained that the South-East is ripe for the Presidency.

He said, “I have not made up my mind whether to vie for president or not. But if opportunity is given to the South-East, I will think again to see if there is room because the party has not said where they are zoning the president to.”

This was made known by the group’s Director General, Ambassador Oladele John Nihi at a press briefing organised to mark the one-year anniversary on Tuesday in Abuja.

While fielding questions from journalists about the speculations making rounds on the zoning arrangement of the All Progressives Congress (APC), the DG said age should be of utmost importance to Nigeria now and not the region where who will govern the country comes from.

He said it is obvious that the country needs a younger leader to rescue it from the current failing state.

“Above all, the only zoning the Nigerian Youth will reckon with is the zoning by age. We don’t want a situation whereby the presidency will be zoned to any part of the country. The only thing we are in support of is changing the old order to a new order. And that is to say, anybody above 50 years of age should gladly take the back bench and continue to support the young ones while people below 50 take over the leadership of the country and we believe they will run it effectively,” he said.

He added that people should not be quick to comparing Nigeria with other developed countries with aged leaders that are doing well while attributing the success of such leaders to the fact that such countries have a working system which Nigeria doesn’t have.

According to him, Nigeria is too complex to be ruled by an aged leader.

Defending the interest of Yahaya Bello, John Nihi said zoning is not in the APC constitution and if at all zoning by region is to be considered, North Central and South East should be the focus to produce the next president.

In his words, “As far as we are concerned and for us, because of Yahaya Bello, a lot of people, youths, women and people living with disabilities have joined the APC and one of the major drives in APC is because we understand that the party does not have any zoning arrangement documented in its constitution. So, that clause not included in the party constitution gives us that mindset that we will not be joining APC for joining sake but we would be given the right to pick amongst ourselves the best person who we feel can man the affairs of this country.

“The problem of this country has never been about zoning, if it’s about zoning then possibly the South West will not even be clamoring for presidency today because they produced a president for 8 years and they also have a vice President in person of the incumbent Vice President who by the grace of God we are praying he lives long to end the tenure.

“If you want to talk about zoning, we should be talking about zoning the presidency to a section of the country that has never been given the opportunity to even be either President or Vice President, and the North Central where His Excellency, Alhaji Yahaya Bello came from and the South East are the two sections in question.

“If you search the mind of His Excellency, President Mohamadu Buhari when he made the promise in 2018 that he’s going to hand over to a much younger person. You will see that the president stands in a better position to be able to know the country because he has been privileged to rule this country when he was younger and he’s now  privileged to rule again at his old age.

“So looking at when he was younger and today, he has been able to see clearly that age is a factor in managing the affairs of Nigeria, no wonder he promised to hand over the governance of this country to a much younger person and we have seen in Yahaya Bello, that capacity, willingness and antecedents that can drive the country aright,” Nihi insisted.

Speaking further, the Director General said Tinubu’s utterances following his declaration to succeed President Buhari after the 2023 general elections should be a source of a serious concerns for Nigerian youths.

He questioned why Tinubu decided to achieve a supposed, “lifelong ambition at a time Nigerian Youth are collectively clamoring for thorough inclusiveness and active participation in governance across board.”

He said, “Why put your interest above that of the Nigerian Youth who obviously constitute the majority of both Nigeria population and electorate; a united generation of like-minded people who will stop at nothing to achieve a set objective?

“Why has Baba kept this lifelong ambition to himself all these while his age group and generation has done nothing but little to get the country working?

“Asiwaju Bola Ahmed Tinubu further revealed that he only informed President Muhammadu Buhari of his intention to run for the presidency come 2023, but yet to inform Nigerians. We are therefore on behalf of Nigerian Youth appealing to our National Leader to halt his intention of informing Nigerians about this ‘lifelong ambition,’ for we are not ready to cooperate; as our yearnings and cry for power would not be cowed by any sudden lifelong ambition and mostly not by the older citizens of this country.

“Telling us about this lifelong ambition would translate to us disrespecting an elder statesman who ordinarily we are supposed to be looking up to for advice and mentorship as we take over power in 2023. The Youth4Youth Agenda is already in motion, and we are prepared more than ever before to stand by any of our own, rather than recycling old Politicians we read about to pass examinations during our school days.

“We are apologising to all senior citizens above the age of fifty who feel Nigeria is not working, and should be the preferred hand to fix it. We apologise for the lapses of the past created by these senior citizens who has been in the country’s corridor of power since her independence in 1960 till date, and finally we apologise for the lackadaisical attitude of Nigerian Youth to governance before now, leaving the energy draining job of fixing the country to an age strata who should ordinarily be retired; as strength and vitality has already failed them to carry the burdens of the most populous black nation on Earth on their fragile shoulders. These things are not happening again; as we are more than ready to take over power come 2023.”

He went further by assuring the public of the readiness of Governor Yahaya Bello to lead Nigeria come 2023.

“The candidacy of Governor Yahaya Adoza Bello will stand. And with our structures across the 36 states of the country, doing tedious grassroots sensitization on why the Youths should be given a chance come 2023, have recorded substantial and bankable results.

“We are therefore, still calling on our principal, Nigerian Youth’s role model, and our most qualified by antecedents, to roar as loud as possible; as the jungle is set for the taking. We are also admonishing our Baba and well respected senior citizen to purge his lifelong ambition and passion for the country to continue enjoying his retirement and be more relevant to the country through advisory roles and consultations,” he said.

Nihi also appreciated the efforts of the group coordinators across the country for their commitment towards the actualisation of the big dream of rescuing Nigeria.

He said, “I also commend the efforts and sacrifices of all our Zonal Coordinators, State Coordinators, and Leaders, who has given so much to the actualisation of this big-Nigeria dream we all share to have the person of Governor Yahaya Adoza Bello accept to run for the presidency, and also by the grace of God Almighty, become the President of the Federal Republic of Nigeria come 2023. We could not have gotten this far without you all