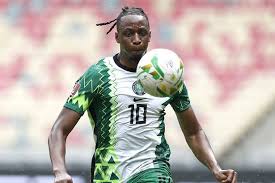 Rangers defeat 4-2 of Borussia Dortmund at the Signa Idunna Park is one of the surprise results of the night in the Europa League matches played on Thursday, (17th of February, 2022) and Joe Aribo played a key role in the Scottish team outlandish victory.

Aribo lasted 86 minutes on the pitch and capped his great performance with an assist as he assisted the Ranger’s second goal with a taken flicked on Tavernier cross which Alfredo Morelos graciously tapped into the net to extend Rangers lead and set them up for a great night.
He created another big chance and 8 ground duels with 31 touches and has 75% pass accuracy to cap a great night.

The Super Eagles invitee, was at the heart of defence as he paired Connor Goldson in the Rangers central defence.
Though the dreaded Erling Haaland was missing in the opposition attack nonetheless, it didn’t take anything away from Bassey’s virtuoso performance as he made two key clearances, four interceptions as well as blocking one shot to resists the barrages of attack from Yellows to keep a healthy two-goal into the second leg in Scotland.

Victor Osimhen lead Napoli Attack as Naples secured a 1-1 lead against Barcelona in the first of the Europa League played Camp Nou.

The Nigerian had a shot on goal and he was involved in the controversy of an offside positioning when the opening goal of the match was scored but he was adjudged not to interfere with the play as the goal stand in favour of Napoli.

However, the Super Eagles striker was caught in an offside position on four different occasions before he was subbed off in the 80th minute.

Barcelona dominated possession and equalised from the penalty spot through Feran Torres , to keep the scoreline at 1-1 draw ahead of the return leg in Naples.

Wilfred Ndidi opened the flood gate of goals as Leicester City got their Europa Conference League knockout playoff off the mark by thrashing Randers of Denmark with a comprehensive 4-1 at the King Power Stadium.

The Nigerian celebrated his 200th game appearance for Leicester in style when he scored in the 23rd minute to put the Foxes ahead from close range.

Ndidi had a fantastic all round performance through out his stay on the pitch before he was sub off in the 65th minute.

Ademola Lookman continues to justify why he remains a major player in Brendan Rogers’ plan as he gave another great performance on the night when Leicester City defeated Rander by 4-1.

The new Nigerian convert has three goals involvement on the night and capped it with an assist of Kiernan Dewsbury-Hall’s goal sealing a perfect night for Leicester.

Kelechi Iheanacho came on in the 65th minutes but failed to add to his five goals tally so far this season.

Tosin Kehinde played the whole ninety minutes for Randers in the game against Leicester City FC. Though it was a sorry night for the team but the former Manchester United had a good game.

He assisted the only goal scored by Randers as Hammershøj-Mistrati, slotted in an unmarked area after a low cross from Kehinde picked him in the 45th minute to finish the first half on 1-1 draw, giving them hope for a better second half.