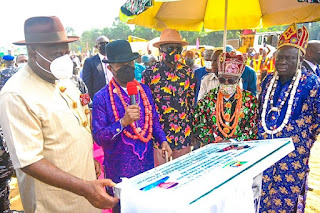 Sixty years after it was conceptualised, history was made on Saturday when Vice President Yemi Osinbajo opened a strategic bridge linking the riverine Oporoma, the headquarters of the largest local government area in Nigeria, Southern Ijaw, in Bayelsa State.

The flag-off at Angiama community was preceded by a historic drive on the Yenagoa-Oporoma-Ukubie road, which construction has reached Angiama.

Osinbajo commended Governor Diri for continuing projects that predated his administration, saying the 36km Yenagoa-Oporoma-Ukubie road was significant as it would improve the economy of the people and reduce the incidence of sea piracy.

He assured that the Federal Government will continue to support the State to enable it meet its developmental aspirations.

Osinbajo said the rural communities in Southern Ijaw were hosts to the nation’s oil and gas wealth, deserving developmental projects such as the historic road.

He argued no inclusive prosperity can thrive without linking communities by road and charged the people of Southern Ijaw to take ownership of the project.

He also called on people of the State to support Governor Diri administration to enable it deliver on its mandate.

He expressed the optimism that the project would be completed by the governor and urged him to continue to serve the people of the state diligently.

Diri described the flag off of the link bridge as significant to the people of Southern Ijaw Local Government Area given the fact that it has been on the drawing board for over 60 years.

The Governor said despite the daunting hurdles and notwithstanding the lean financial situation of the State, his administration decided to prioritise the completion of the Yenagoa-Oporoma-Ukubie road in furtherance of a strategic government master plan.

Describing the project as a Trunk A federal road, he expressed the readiness of the State Government to partner the Federal Government for speedy completion of the project