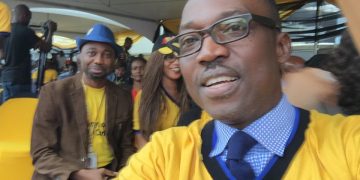 MTN Nigeria is currently embroiled in a huge sex scandal, with Adekunle Adebiyi being repeatedly named in the drama for what his accusers described as sexual harassment.

The can of worms opened by MTN Nigeria’s disgruntled female employees under the aegis of ‘The Anonymous Whistle Blowers’ was reported on Thursday morning, and according to sources, the report, which has since gone viral, as well as other internal forces, allegedly forced Adekunle Adebiyi to resign.

According to the petition sent to MTN Nigeria headquarters in South Africa by ‘The Anonymous Whistle Blowers,’ Adekunle Adebiyi, the telecom giant’s Chief Sales & Distribution Officer, is “a sexual predator who also uses his position to engage in several sharp practices that include contract inflations, receiving kickbacks, inventing false sales figures to deceive the organization’s leadership and continue to keep his coveted role,” they asked that he be sacked with immediate effect, Prestige News reports.

In their petition, the disgruntled female employees further said that Adebiyi was able to get away with all of his crimes due to the cover he received from MTN Nigeria CEO Karl Toriola and Cyril Ilok, head of forensics.

MTN Nigeria has purposefully abstained from making any formal statement on the serious allegations as of the time of reporting this story, in what has been described as a calculated move.

Despite the fact that he stated in his resignation letter that he was resigning to pursue other endeavors, Prestige News has been reliably informed that because he has attained such a high position in MTN, the telecoms company will not sack him despite the enormity and weight of the allegations against him; rather, they pressed him to tender his resignation to avoid further dragging its brand into the mud.

All efforts by Adebiyi and his cronies to block the controversy from spreading like wildfire were futile, according to inside sources, since they were outsmarted by the ‘Anonymous Whistle Blowers,’ who remained discreet while compiling evidence against them for months, putting their jobs on the line.