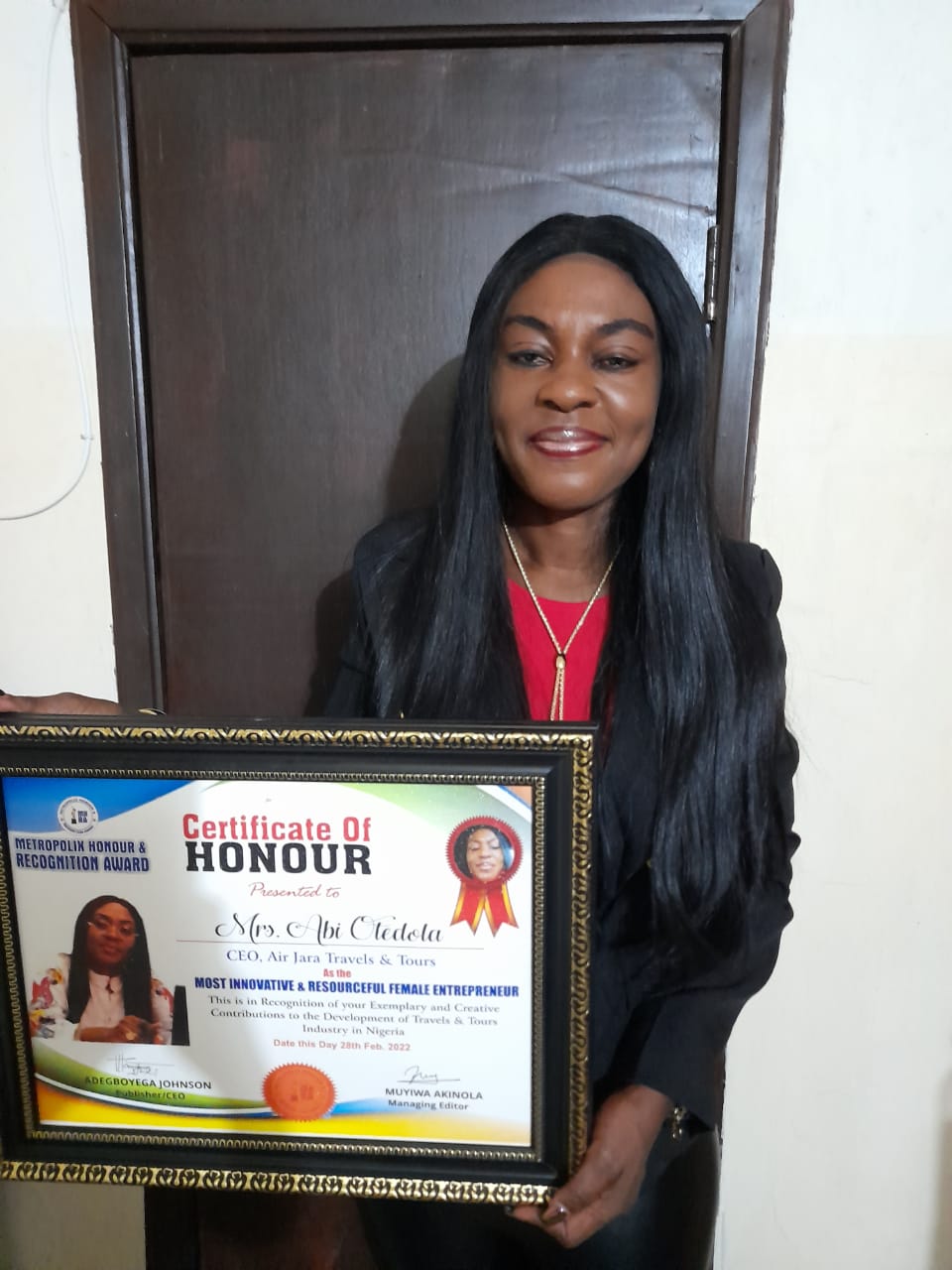 Hardworking CEO of wavemaking Air Jara Travels and Tours, Abi Otedola on Monday was honoured with Metropolix Certificate of Honour as the Most Resourceful and Innovative Female entrepreneur. The presentation was done at her Victoria Island, Lagos office. Abi while giving her speech thanked the CEO of Metropolix Magazine & Online, Johnson Adegboyega for deeming it fit to honour her.

“I’m elated beyond imagination that we are once again being recognized. I thank the Publisher of Metropolix Magazine & Online, Mr. Johnson Adegboyega for being impartial and for his ability to put to work the real ethics of journalism. I can say frantically that I really don’t know him, even though he interviewed me at Nigeria Media Nite Award, where I received an award as Most Resilient Industry Player (Platinum Gold Award) and presented Governor Sanwo-Olu’s award as The Best Governor of the year, until I saw the letter. One thing I always believe in life is that what’s is worth doing is worth doing well, just within few years of Air Jara’s existence in Nigeria, we have massively been recognized. Not only by awards but with the number of clients that visit our office on daily basis, a good sign to tell the world that we know our onions.”

However, Adegboyega also expressed his view, ” Honour according to Oxford dictionary is a tangible symbol signifying approval or distinction. Right from the very day I met the CEO of Air Jara Travels and Tours, I took my time to do a through research on her person and the activities of Air Jara which came out satisfying. Right from day one, we don’t indulge in money for award syndrome which has become rampant in the industry today. I always give my team of experts the assignment to research about whosoever we want to honour. Since the third phase of Metropolix Certificate of Honour presentation started last year, many notable personalities have been honoured. Range from banking, telecommunications, Insurance, Media and many other industries and we’ve been able to do it distinctly without prejudice. Abi Otedola has brought innovations into Travels and Tours industry and I believe she deserves a honour for this.” Adegboyega said.