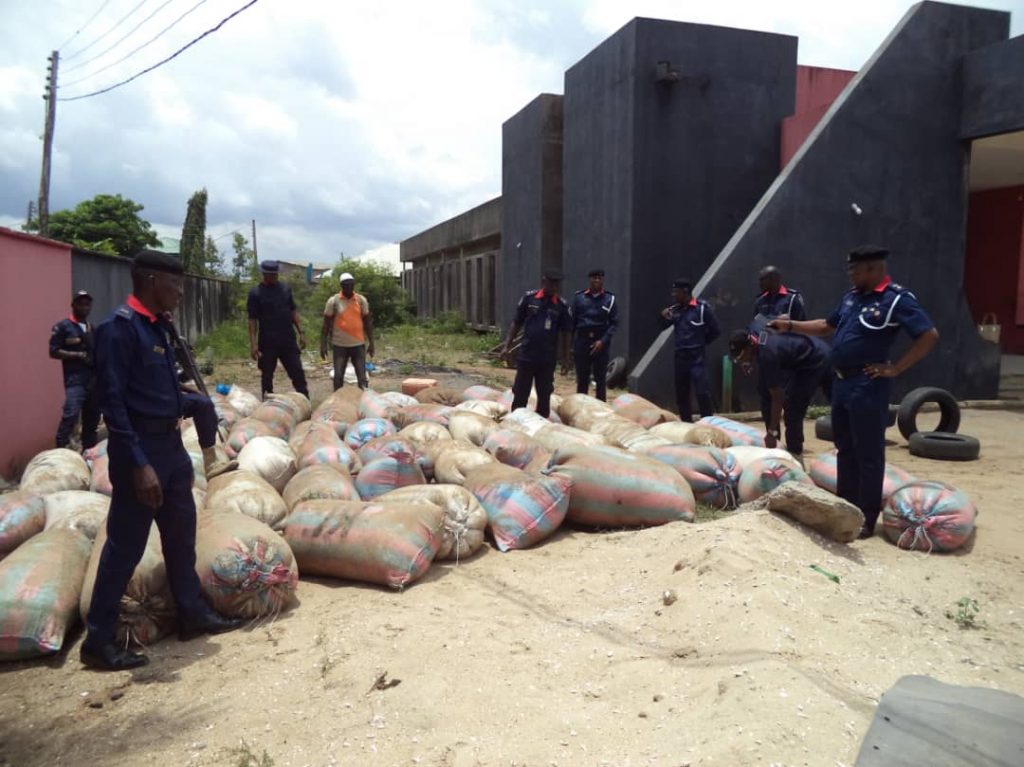 Following the renewed and re – invigorated efforts of the Commandant, Nigeria Security and Civil Defence Corps, Lagos State Command, Commandant Eweka Edenabu Okoro, MSC, ACMA, CNA, towards eradicating oil pipeline vandalism and other form of criminalities in Lagos state, especially during the forthcoming Easter celebration, the marine and anti – vandal team of the Badagry division, of the Command, who were on an aggressive and continuous routine surveillance and patrol of the creeks as a result of a well acsertained credible intelligence report about the activities of some suspected vandals within the creeks at the Badagry axis, today, Tuesday, 12th April, 2022, midnight at about 01:55hrs, uncovered the planned criminal activities, of some suspected vandals within Division.

The gallant marine and anti – vandal team, of the Badagry Division, who recovered the suspected vandalised petroleum products said, “they uncovered the well orchestrated attempt of the men of the night, to cart away about sixty – four(64) sacks containing Premium Motor Spirit(PMS), which the vandals have hid within the Isalu creek, due to their act of economic sabotage along the Seme and Badagry axis.

The suspected products recovered by the gallant men of the Badagry Division was estimated to amount to about seven thousand, six hundred litres(7,600ltrs) of PMS. What is more important here, is the act of sabotage, which will never be allowed to thrive in the state, in line with our mandate, no matter the quantity of products attempted to be vandalised by the untoward saboteurs.

The incredibly operational and performing Divisional Officer, Badagry Division, Lagos State Command, Chief Superintendent of Corps ( CSC ) Akinyemi Rasheed Ayodeji, who led the operation, further said, “the suspected PMS packed in sacks by the vandals at the Isalu creek were recovered and evacuated to the Divisional Headquarters at Ibereko – Division. Thereafter, the team further embarked on a deliberate combing of the Isalu creek at the same hour, after which they evacuated the suspected products to the Divisional Headquarters, in a bid to suppress any unforseen attempt by the suspected vandals to continue the unlawful and inhuman business. The Division’s intelligence unit has also commenced preliminary investigation into the matter, having informed the Command’s Head Quarters immediately.

The Commandant said that the Nigerian National Petroleum Corporation ( NNPC ) office in the state will also be contacted for proper evacuation of the products because of the highly inflammable nature of it.

Finally, Commandant Eweka Okoro, also seized the occasion of this excellent operation, to further reiterate the Command’s readiness and commitment towards eradicating oil pipeline vandalism amidst the forth coming Easter celebration in the state. He as well further assured the good people of Lagos and the Government of Lagos State, of his unflinching commitment towards eradicating oil pipeline vandalism and every form of economic sabotage in the state.