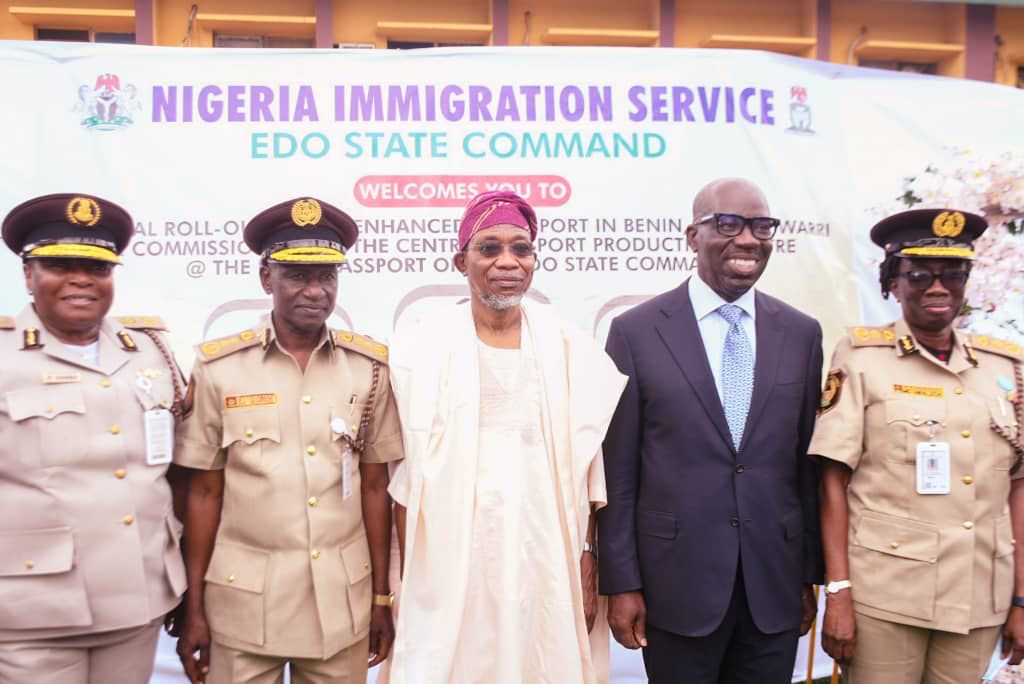 The enhanced passport of the Nigeria Immigration Service was today declared the real deal in passport making, stating that It is a product of the latest technology in passport administration and issuance. This is just as 625,000 passport has been issued to Nigerians desirous of acquiring the travel document in 2022 alone.

This was revealed by the Minister of Interior, Ogbeni Rauf Aregbesola, at the Rollout of the Enhanced e-Passport for Delta and Edo States, which was held at the Passport Office Headquarters, Benin, Edo State recently.

“Our enhanced passport is the real deal in passport making.Today’s event is unique in many ways. The most important is making the enhanced ePassport available to the good people of Edo and Delta States. The enhanced ePassport comes in various categories, including the 64-page-10-year validity Passport which is quite convenient for frequent travellers. It is a product of the latest technology in passport administration and issuance.

“This year alone, we have received about 750,000 applications out of which we have provided 625,000. The difference could have been due to many reasons, including failure of applicants to provide the correct information about themselves and matching their data with NIN. We could not contact them because they applied through touts who provided their own addresses or wrong ones altogether. But 625,000 is a huge and unprecedented figure, in less than half of the year, by any stretch of the imagination,” the Minister stated.

Speaking further, the Interior Minister noted that President Muhammadu Buhari was indeed worried about the hassles Nigerians go through in securing the passports, noting that the role of the Nigerian Immigration Service is to make Nigerians desirous of getting the passport do so with ease and without stress.

He said, “President Muhammadu Buhari’s charge to us is explicit. Make life easy as much as possible for every person you have to relate with and remove every hurdle hitherto in their way on getting business done.”

He continued, “Last week, President Buhari expressed concern on report that some Nigerians, especially those abroad, were unable to obtain their Nigerian passports. I share this concern as well.

“I am asking therefore that the NIS do everything within its power to make this a thing of the past. Every Nigerian desirous of the travel document should be able to collect it within the stipulated time, without any stress whatsoever,” Ogbeni Aregbesola instructed.

Also speaking at the event, the Governor of Edo State, Mr. Godwin Obaseki stated that the state government was ready to partner with the Federal Government and the Nigeria Immigration Service in delivering on its mandate to Nigerians, promising to building a deserving Passport Centre in Auchi for the Service.

“Let me reiterate here like I told the Honourable Minister, the State Government of Edo will partner with the Federal Government and the Nigeria Immigration Service in helping them to deliver on their mandates to Nigerians.

“We would build in six months by God’s grace, a passport centre in Auchi for the Nigerian Immigration Service so that they are able to service our citizens from that side of the state,” Governor Obaseki promised.

Meanwhile, the Acting Controller General, Nigeria Immigration Service, Idris Isah Jere, has assured Nigerians of the determination of the service to smoothen it service to Nigerians.

“Nigerians can be rest assured of getting a non-judgmental Service at this Centre in Benin. Our officers are well-trained and ready to discharge their duty professionally.

“Applicants are advised to ensure their NIN details are exactly the same with their passport application details to avoid a situation where the applications are unable to be processed due to a mismatch of data.

After the cutting of tape which signifies the rollout of the new enhanced passport, service personnel conducted the Governor and the Minister on a tour of the production facility which will serve both Edo and Delta State.

The entourage of the Minister later proceeded to the Palace of Oba of Benin, Omo N’Oba N’Edo Uku Akpolokpol, Ewuare II, to intimate him of the new development in passport production for Benin, Edo State, Warri and Asaba, Delta State.

The Oba used the opportunity to thank President Muhammadu Buhari, GCFR, for taking special interest in Benin, citing the new enhanced passport production centre in the city and the relocation of artifacts to their origin and in custody of the traditional rulers of those places.