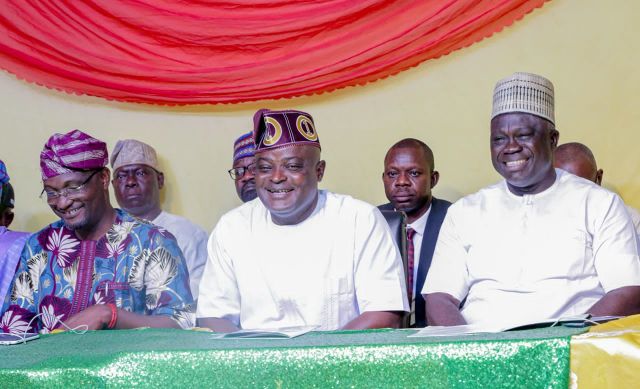 Ahead of the 2023 general elections in Nigeria, the Speaker of the Lagos State House of Assembly, Rt. Hon. Mudashiru Obasa, has appealed to qualified residents of the State not to only register, but ensure that they vote.

Dr. Obasa gave this advice on Thursday, June 30th, 2022 at the 8th Annual Constituency Stakeholders’ Meeting held simultaneously by lawmakers across the State.

This was as Mr. Felix Daramola, Head of Electoral Operations at the Independent National Electoral Commission (INEC), lamented what he described as very poor outings by voters in the State during elections.

Addressing stakeholders in his Agege Constituency 1, Obasa noted that the theme of the stakeholders’ meeting, ‘2023 General Elections: The Imperatives of Permanent Voters’ Cards’, was very apt as the nation matches towards the elections.

Commending the constituents for
being responsive to matters affecting their
communities and the State at all times, the Speaker lamented: “It is, however, quite worrisome that over 20 million Permanent Voters Cards (PVCs) still remain uncollected across the nation according to a recent INEC report and out of this huge figure, one million are from Lagos State”.

“This situation does not augur well for our progress, our democracy and the development of the State as it may create an opportunity for incompetent persons to be elected as our leaders and representatives and thus overturn our achievements.”

“As you know, Lagos State has been so blessed with great and visionary leaders and
representatives right from the Second Republic in 1979 when Alhaji Lateef Kayode Jakande came on board as the first civilian governor, supported by a vibrant House of Assembly, and most significantly from 1999 in the Fourth Republic with Asiwaju Bola Ahmed Tinubu not just emerging as the governor of Lagos State but revered as the architect of modern day Lagos.”

“All these were made possible due to citizens actively voting at elections to choose the right candidates.”

“Consequently, the Lagos State House of
Assembly under the able leadership of Rt. Hon. (Dr.) Mudashiru Ajayi Obasa wish to reiterate the need for everyone to obtain his or her PVC in order to vote in the coming general election. Your PVC is your power not just to continue building the State but the nation as well; it is your power for continuity, it is your power for the stability and sustainability of our enduring and cherished democracy, it is your power to secure a bright and promising future for our children, our State and the nation,” Obasa said.

Emphasising the need for mass participation in the elections, Daramola said Lagos now has 13,325 polling units. Of this figure, he said Agege now has 696 polling units, thus bringing voting centres closer to the electorate.

He also said with the introduction of BIVAS, it had become very difficult to rig elections since it allows for election results to be transferred electronically.

Warning against multiple voting, Daramola noted that in Lagos State, “a total of 640, 774 eligible voters had done online registration before it ended on May 30, 2022. But as at Monday, June 27, only 371, 760 had completed their online registration.”

Analysing online voter registration across states, he lamented: “Osun State has 708,968, Delta State, 641,174 while Lagos has 640,774. This is not acceptable with the population and megacity status of Lagos State.“

“You can see that we all have a lot of job to do to make sure our people get registered.”