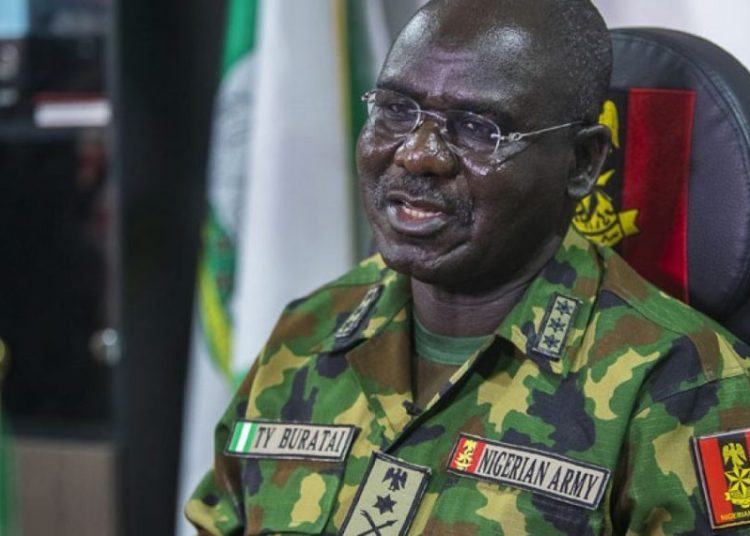 *His lawyer writes publishers of report to retract it, apologise within seven days

A former Chief of Army Staff, Lt. General Tukur Buratai (retd.), has faulted a report linking him with the about N1.85billion looted funds allegedly recovered by the Independent Practices and other related offences Commission in a property in Abuja.

Buratai through his lawyer, Dr Reuben Atabo (SAN), in a letter dated, July 8, 2022, therefore, demanded that an online publication – Saharareporters, which published the said report, should retract same and apologise within seven days.

Copies of the letter were made available to journalists in Abuja on Saturday.

Efforts made to contact
the Publisher of Saharareporters, Omoyele Sowore, on the matter proved abortive.

The ex-COAS, who is currently Nigeria’s Ambassador to the Republic of Benin, said the very serious allegation in the report was capable of brewing hatred and attack by the public against him.

He added that the report had caused him great embarrassment.

“In the said publication, you alleged that the Independent Corrupt Practices and other related offences Commission ,had recovered N1.85 billion from a house and office said to belong to our client.

“It was further reported by you that ‘the huge cash was part of the billions of naira earmarked for the purchase of arms and ammunition by the Muhammadu Buhari-led government.’

“This is a very serious allegation capable of brewing hatred and attack by the public against our client as a former Chief of Army Staff.

“There is no doubt that Nigerians are seriously concerned about the security situation of the country and the said publication has portrayed our client as a person responsible for diversion of funds meant for the fight against Boko Haram.

“Consequently, our client has been exposed to hate, ridicule and embarrassment from members of the public with his friends calling him from different parts of the world to ask for explanations.

“The publication is not only false but malicious and an attempt to malign the reputation of our client.

“Our client, who is the current Ambassador to Benin Republic, rose through the ranks and became a Lieutenant General in the Nigerian Army before his retirement in the year 2021.

“Our client, who was also a former Chief of Army Staff from July 2015 to 2021 has taken the battle against insurgency to the field with enormous energy and resources as well as loss of field officers.

“By your publication, our client has been ridiculed as a man without honour, dignity and incapable of representing Nigeria and portrayed as a fraudster/ dishonest person before Nigerians and the international community.

“Take notice that if you fail, neglect and/or refuse to publish the apology within seven from today, we shall not hesitate to commence legal action against your organisation for defamation.