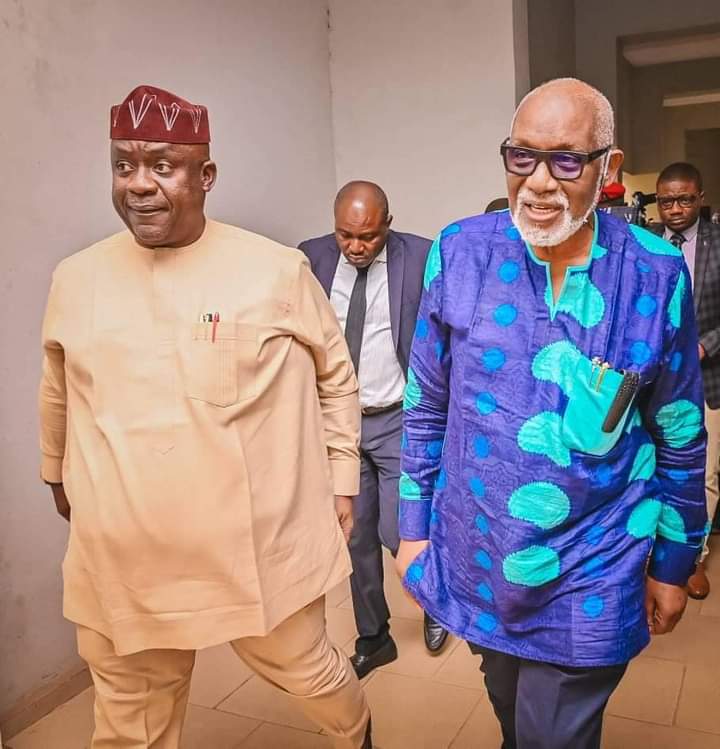 •God Has Made You Minister Against All Odds, Gov Akeredolu Tells Adegoroye

The new Minister of State for Transport, Prince Ademola Adegoroye has said that the people of Akure will never forget the good deeds the Governor, Arakunrin Oluwarotimi Akeredolu,SAN, has done for the state capital.

He said the Governor has made it possible for an Akure man to become a Minister for the first time.

The new Minister paid a Thank-You visit to the Governor in company of his wife, Mrs Olufunke, and hundreds of Akure sons and daughters.

They were received at the Cocoa Conference Hall of the Governor’s office, Alagbaka, Akure.

Prince Adegoroye who could not hide his joy appreciated God Almighty and sang various songs of praise, saying that God has elevated him through the Governor.

He was quick to thank Governor Akeredolu for his immeasurable roles, which he said led to his emergence as a Minster of the Federal Republic.

The Minister, who explained that it’s the first time an Akure man would be appointed as Minister, disclosed that the appointment came at a time when people thought everything was finished for him.

“An Akure man has never been Minister before. What you have done for us is something that no one has ever done. And Akure will mark it. Please, forgive and forget all that Akure has done in the past. You will see the difference from now on.

“The Governor is a man of integrity. He said go and I will back you. When a man has integrity, when he says yes, the yes will not change. Mr Governor, you have shown mercy to me. God has used you to take me up, God will continue to lift you and your children up sir. An Akure person has never been Minister before.” He said.

He specially prayed God to give the Governor and all other members of his family long life and good health.

Receiving the new Minister and his entourage, Governor Akeredolu, who expressed delight over his appointment, said only God gives position, adding that God has given him victory despite all odds.

The Governor pleaded with the poeple not to distract the new Minister with endless responsibilities.

“Ademola, this is a victory God has given you. Please use this office very well, serve everyone in the State. Whatever will be, will be. God has elevated