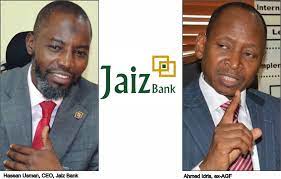 The Economic and Financial Crimes Commission, EFCC, may soon summon Hassan Usman, the managing director of Jaiz Bank Plc, and other senior members of the Islamic bank for questioning regarding their alleged roles in the N109 billion that Ahmed Idris, the former Accountant General of the Federation, is accused of stealing, according to sources in the commission.

Idris, who is currently facing charges from the EFCC along with two other conspirators, Godfrey Olusegun Akindele and Mohammed Kudu, allegedly stole enormous sums of money by hacking into the Treasury Single Account (TSA), Government Integrated Financial Management Information System (GIFMIS), Integrated Payroll and Personnel Information System (IPPIS), and smuggled away billions of naira that belonged to the government.

Investigative work by the EFCC revealed that the former Accountant General had opened bank accounts with an Islamic bank and utilized those accounts to refine his money-laundering techniques.

It also said the was used to launder a sizable amount of money to high government officials at the federal and state levels, while the magazine is unable to determine the extent of some bank employees’ involvement in the crime.

According to information obtained by The Source Magazine, the commission is currently working to uncover any shady dealings the former AGoF may have had with some Islamic bank executives, which may have “enabled him to use the bank to launder public monies.” The bank must respond to important queries, according to an EFCC source.

“The Accountant General and his accomplices must have chosen Jaiz bank, in order not to draw any suspicion from the public and banking regulators. But it’s now obvious that there’s no hidden place for the bank and greedy government officials who committed the fraud. The EFCC will get to the bottom of the fraud and expose those involved” another EFCC top official said on Tuesday.

“There is a need to question more top officials of the bank apart from the chief executive who must be privy to how and when huge sums of money were moved without deeming it fit to alert constituted authority in the country and EFCC. There’s no way huge sums will be moved without the MD’s knowledge, and we are quite sure these officials are not unaware of the money laundering law,” the official said.

The EFCC claimed that Idris utilized a substantial portion of the stolen money to launch businesses and buy real estate in Kano, where he is from, as well as Abuja and other places.

These properties include, among others, the Kano City Mall, the Gezawa Exchange Limited, and the Gezawa Integrated Farms.

A portion of the earnings from the theft were also utilized by the disgraced former accountant general to bribe important members of the state and federal governments, including former governor Abdul-Aziz Yari of Zamfara state, who was at the time the chairman of the Nigeria Governors’ Forum (NGF).

During the trial last week, an EFCC prosecution witness Hayatu Ahmed said Idris has accounts with Jaiz Bank which he used to make payments to individuals and companies, including a N280 million he paid into “Gezawa Commodity Market with Jaiz Bank.”

Additionally, it was discovered from EFCC sources that the bank was used in a large number of transactions that the disgraced Idris conducted with bureau de change. Several bureaus de change in Kano and Abuja were paid via the bank, according to credible proof. The source stated that the dollar equivalent was then collected in cash and afterward paid directly to people who had benefited from the crime.

Giving an overview of the fraud last week, the EFCC witness claimed that three groups shared the stolen money, including members of the Revenue Mobilization Allocation and Fiscal Commission (RMAFC), including one of its commissioners, Peace Akomas, a former deputy governor of the Abia State who is accused of collecting N18.8 billion.

“The third group, the Commissioners of Finance in the nine oil producing states, received N21.4 billion. The money was withdrawn by Akindele, converted to US dollars, and handed over to Akomas on behalf of the group.

“The fourth group is called the Yari group. This group received N17.15 billion. The entirety of the sum was transferred to the account of Fimex Professional Services on the instruction of the representative of this group – Abdul’Aziz Yari, former Zamfara state governor.

“The remaining N8.9 billion was retained by the second defendant. Furthermore, N4.29 billion was converted to US dollars by Akindele as appreciation for the consultancy contract, and the balance of N4.6 billion was given to Akindele,” the EFCC witness said in court.