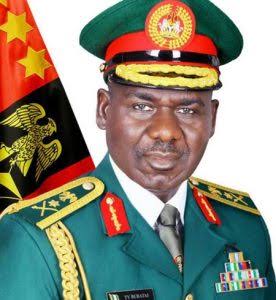 Sahara Reporters is set to pay N10bn for lying against Former Chief of Army Staff (COAS), Lieutenant General Tukur Buratai (retired) who has filed a suit against the online newspaper over a report linking him to a N1.85 billion recovered loot.

In the suit with number FCT/HC/CV/252/2022 filed by his lawyer, Dr Reuben Atabo (SAN), Buratai asked the FCT High Court to declare the Sahara Reporters’ publication captioned, “Exclusive: Anti-graft agency, ICPC uncovers billions in cash meant for arms, ammunition to fight Boko Haram in Abuja home of ex-Chief of Army Staff, Buratai” of June 23, 2022 as pure defamation of character. The ex-COAS wants the court to award him the sum of N10 billion in general and aggravated damages over the use of libellous words in the publication of the online platform.

He further demanded an order of the court compelling the newspaper to publish a retraction and an apology in two national dailies and its online platform “where the defamatory publication was made.”

Buratai, who was appointed Nigeria’s ambassador to the Benin Republic after he retired from the army, averred that the publication damaged his reputation after he diligently served Nigeria in various capacities and was awarded various meritorious honours for his distinguished service. No date has been fixed for the hearing.