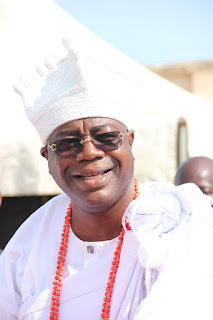 Oba Ogunsanwo spoke during the second anniversary of his ascension to the throne held in his Palace at Epe, saying he has achieved the short-term plans set at inception.

The Royal Father also promised to accomplish the medium and long-term targets that would make the citizens enjoy a new lease of life during his reign.

Showering encomium on Governor Sanwo-Olu for deploying modern infrastructure in Epe, the Alara said, “I was so glad to hear the Governor mention that Epe is becoming a small London. Of course, it is glaring and we can see this in the area of infrastructural development, education, health and agriculture”.

“The Epe-Eleko Road under construction is 90 percent completed, Epe Ijebu-Ode Road has been reconstructed and rehabilitated. Recently, Michael Otedola College of Primary Education (MOCPED) was transmuted to Lagos State University of Education (LASUED). Governor Sanwo-Olu also commissioned the Maternal and Child Centre (MCC); we have the biggest refinery and seaport here in Epe.

In fact, soon Epe will become an industrial, educational and tourist hub where many activities with modern facilities will be in place and the State Government has, indeed, been passionate and magnanimous about developing Epe. I am really thankful for this”, Oba Ogunsanwo said.

Acknowledging that Sanwo-Olu has met the requests made to the Lagos State Government when he was enthroned, the monarch outlined the projects executed to include the reconstruction and rehabilitation of the bad roads in Ilara, supplies of solar power and transformers and the Lagos Aquaculture Centre for Excellence (LACE).

He explained that the LACE project was initiated to galvanise the fishing value chain in Lagos and create more employment that would boost the economy of the State.

HRM said: “With all these and more projects, proposed and delivered by Mr. Governor, I want to thank him and his team for a job well done so far and I pray he comes back for the second term to continue with this good work and for us to continue to enjoy the dividends of democracy”.

During the interfaith prayer session of the anniversary celebration, the Oba of Poka Land in Epe, HRM, Oba Kolawole Aileru, prayed for many more years of good health, peaceful reign and progress of Ilara kingdom and Lagos State at large.

The highlights of the event included the celebration of the 1st Aje festival, a celebration to appease the goddess of wealth, and the official unveiling of the refurbished ancient Alara of Ilara palace as well as Aje pavilion