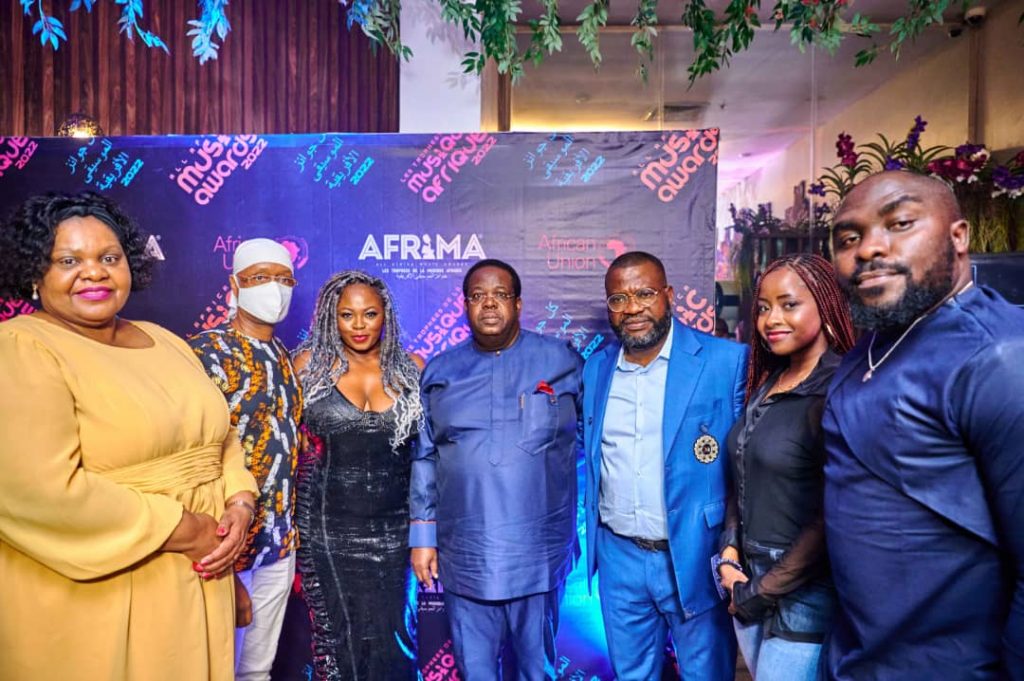 …..…surprises Patron, Onasanya at 61 with a special birthday shout-out

It was an exciting blend of glitz, glam and euphoria as the All Africa Music Awards (AFRIMA) hosted its annual patron’s dinner with the jury members, held Wednesday, in Lagos, Nigeria.

The event, which feted stakeholders in Africa’s creative economy, including media and music executives, and African entertainers, among others, gave a glimpse into what to expect from this year’s edition, as the  #RoadToAFRIMA22 continues to take an interesting glide in highlighting and celebrating talents from all parts of Africa.

Also present at the continental event, which in the past nine years, has continued to celebrate African talents, were music enthusiasts, stakeholders, artiste managers, as well as musicians such as Eltee Skhillz, Major AJ, Tariq, among others.

Held at the EbonyLife Place, in Victoria Island, Lagos, the dinner was a close experience into the AFRIMA Award experience, as the dignitaries present met with the jurors, composed of music aficionados from across all five regions in the continent and in the diaspora, as well as a representative from the African Union Commission (AUC).

Hosted by AFRIMA Patron, Dr. Bisi Onasanya, the annual patrons’ dinner with the jury is a special gathering, held during the annual adjudication, to appreciate the jury members for their unflinching support in sieving out the best of talents for nomination at the awards.

The jury members are presently in Lagos, Nigeria, for an 8-day adjudication which began, last Friday, to select the nominees for this year’s edition from 9,076 entries submitted – the highest the awards has ever recorded since inception in 2014. The nominations list would be unveiled Monday, August 22, 2022, while voting begins Wednesday, August 24, 2022.

Onasanya expressed enthusiasm at the successes recorded by AFRIMA, noting that the enduring vision of the award body, in conjunction with the AU, will continue to come to fruition.

He said, “This event is to appreciate all the jury members. They are wonderful. They have been very thorough and have given AFRIMA the credibility it has today. They have been working assiduously for the growth of our creative sector. I am very proud to be associated with AFRIMA.

“African music is taking over the whole world by surprise. You go to other parts of the world these days and you hear African music being played. I am always excited because it didn’t happen a decade ago. The whole world is now respectful of African music, and they are learning from us. This is a great achievement. AFRIMA, last year, was awesome. It was broadcast all over Africa. If you think last year was awesome, just wait until you see what will  happen this year.”

In her keynote speech, a juror representing the African Union, who is the Head of the Culture Division at the African Union Commission, Mrs Angela Martins, appreciated the stakeholders in Africa’s creative space, as well as the award’s organisers for their invaluable contribution to the development of the African creative economy.

She said, “The African Union Commission, which has been a partner with AFRIMA since its inception in 2014, wishes to congratulate AFRIMA for its enthusiasm and priceless efforts in promoting the growth and development of the music industry in the continent, despite the challenges including the Ebola crisis in 2015 and the COVID-19 pandemic in 2020. In 2020, AFRIMA played a key role in supporting the AUC in thinking out of the box and finding creative ways of using music to sensitise the continent on issues relating to the pandemic and to mobilise resources for the AU COVID-19 response fund. Hence, we organised a joint conference titled, Stronger Together.

“We know that this is enormous for the well-wishers and supporters, but on this occasion, we wish to pay special tribute to the AFRIMA patron who came on board last year and has been supporting this pan-African music initiative wholeheartedly and unconditionally. His support has increased the visibility of the award. We appreciate and salute him.

“We also wish to express gratitude to the AFRIMA jury from the five regions of the continent and from the diaspora who have supported and believed in this initiative. The adjudication process is a long process and it requires dedication, fairness, transparency and hard work. It takes An African music lover to perform their duties in the way they have been doing so since the inception of the process. We applaud them. We also wish to thank the media whose work has been essential in ensuring the popularisation and growth of the cultural and creative sector of the continent.”

“I really wanted to serve the world and Africa. I have learned great things and learned a lot about talents and our impact here. I want to encourage everybody to know that as much as African music is travelling all over the world now, it is also important to support our own and watch it grow,” he said.

Similarly, another juror representing Central Africa, Mr Charles Tabu, lauded the prospects in AFRIMA’s drive to boost inclusiveness in her mission to celebrate and spotlight African talent on a global stage.

He said, “It gladdens me to see the creative work that comes out of Africa being awarded. I would like to thank the entertainers for always submitting their entries and believing in the growth of the African creative space. I am from Francophone Africa and I am glad to see artistes from all regions get a chance to be celebrated across the continent and in the diaspora.”

“I am delighted by the support from every stakeholder in our creative economy, from the Patron, to the media, to the entertainers and record executives. I am delighted that we are working closely to make Africa great again. The idea of the patron’s dinner is to thank our jury members. They sit for 18 hours daily for 10 days to sieve out the best talents from several thousands to be nominated for the respective categories they fall under. We do this yearly. And we are not resting on our oars. Together, we will make Africa the pride of the world.”

As the event raced to its end, AFRIMA’s patron, Onasanya who was surrounded by family, friends and well-wishers, was surprised with a special cake to celebrate his 61st birthday.

Born August 18, 1961, Onasanya, who is a firm believer in the potential of the African creative sector, built a legacy within the African financial and banking sector over the years. After his meritorious retirement, in 2015, the mogul delved into the luxury real estate development sector, currently thriving as a leading player within that sector as the founder and Chairman of The Address Homes, in addition to impacting other spheres, including Africa’s culture and creative scene.

The AFRIMA awards ceremony will feature a 4-day fiesta of music, glitz, and glamour. The event is scheduled to commence with the welcome soiree, followed by the AFRIMA Music Village, the host city tour, African Music Business Summit, and the exclusive nominees’ party and concluded with the live awards ceremony broadcast to over 84 countries around the world.

African music lovers can take part in the events on social media, live stream on the AFRIMA website at www.afrima.org and visit the social media platforms (Instagram – Afrima.official; Twitter – Afrimawards), and they can watch the event coverage by tuning in to their local and cable TV providers.

In partnership with the African Union Commission, AFRIMA is a youth-focused music platform that recognizes and rewards the work and talents of African artistes across generations and primarily stimulates conversations among Africans, and also the rest of the world, especially on the potential of the creative arts for fostering real human enterprise, contributing significantly to social cohesion, economic growth as well as sustainable development in Africa.