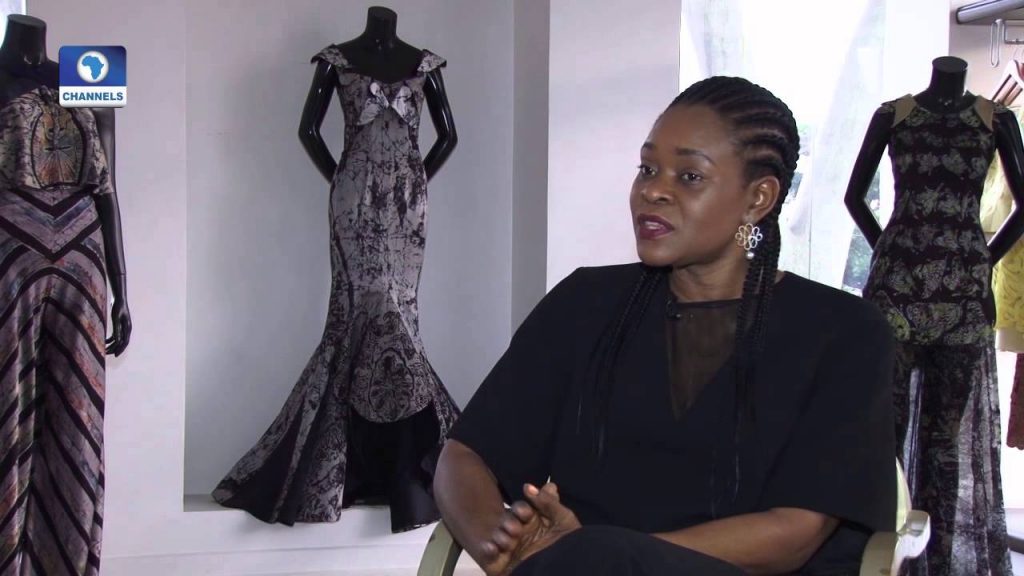 The first black woman to ever present a collection at AltaRoma, Rome’s celebrated fashion week in 2004 and the first Nigerian to have her own stand-alone show at the New York Fashion Week in September 2014, Deola Sagoe has earned her right to every accolade she is described with, in the global fashion industry. Her attention to detail, ability to handle a diverse range of fabrics and her ingenuity are only a tip of the larger picture of Nigeria’s foremost ‘fashionpreneur’.

Adeola Ade-Ojo was born in August 1966, the first child of Chief Micheal Ade-Ojo, and Mrs. Elizabeth Wuraola Ade-Ojo. It was literally a family of entrepreneurs as her parents founded the Elizade Group, which would later be run by her brother.

From business to fashion business

Deola studied Business Administration at the University of Miami in Florida, the United States and returned in 1987 after her graduation to start a Masters in Finance and Management at the University of Lagos. While she was at it, her father encouraged her to join the family business when she completes her studies. Having received proper business training in Administration, Finance and Management, the family business would be the logical place to start out.

Deola had no issues with joining the business, but she had already developed an appreciation for fashion. She opted instead to join her mother’s small tailoring business which was focused majorly on producing traditional embroidered menswear. Deola was interested in taking the business which had become a major fashion label of its own, to new marketplaces. The compromise she reached with her father was that she would still work for the Elizade Group while pursuing her fashion interest with her mother’s business.

She would later say; “I didn’t choose fashion, it chose me. Fashion was my destiny”.

Describing her style, Deola says; “African designers face so many challenges, producing collections and working hard to rise above the manufacturing infrastructure problems. For me, it’s about rising to the challenge and I think it’s made me a better designer. I feel I produce more intelligent clothing as a result. I try to fuse African cultural style with a modern approach to design. I love the dynamism of creating modernity out of something that is steeped in history. I think it’s what gives my collection such a cultural mix.”

She featured in and produced costumes for “October 1” the monumental film on Nigeria’s independence directed by Kunle Afolayan in 2015: and earned for herself the Multichoice-Africa Magic Viewer’s Choice Award for Best Costume Designer.

The Sagoe brand is taking the lead in African haute couture fashion. Her designs have such appeal that Deola Sagoe now services a clientele of notable personalities across the world. In 2010, the Deola Sagoe brand was recognized as a ‘Super Brand’ and received the Super Brand’s Certificate of Excellence in Fashion Design and Label category.

Sagoe also partnered with her daughters in 2011 to found their own label, which focuses on servicing the younger, more price-conscious consumer with uniquely designed casual wears and dresses.

She is not just another successful Nigerian entrepreneur but has placed Nigeria on the global fashion map. The glamorous flagship store and headquarters on Victoria Island was opened in 2008 and is home to the brand’s offices, showrooms and production facilities.

A goldfish has no hiding place and so it did not take forever for Deola Sagoe to catch international attention. From being the MNET Face of Africa in 1998, Deola Sagoe was nominated by the influential US Vogue Editor, Andre Leon Tally and won the MNET Anglo Gold African Design Award (New York) in the year 2000. She was also selected as one of four designers from Africa to show their work at New York Fashion Week in 2000.

What stood the Sagoe designs out is that she was the only one to showcase designs using authentic African fabrics from antiquity, but incorporated into contemporary designs. Once the recognition started, it had no stop. In 2001, Deola Sagoe was rated number 37 on the African Almanac scale of 100 most influential Africans in the world.

She became the first black woman to ever present a collection at AltaRoma, Rome’s celebrated fashion week in 2004 and the first Nigerian to have her own stand-alone show at the New York Fashion Week in September 2014. Again she received recognition of the Platinum Quality Award for her superior clothing at the 10th International Star Awards in Paris in 2007. One short year after, she received the International Quality Award (the diamond category) of Excellence and Business prestige at the Quality Summit in New York, in 2008.