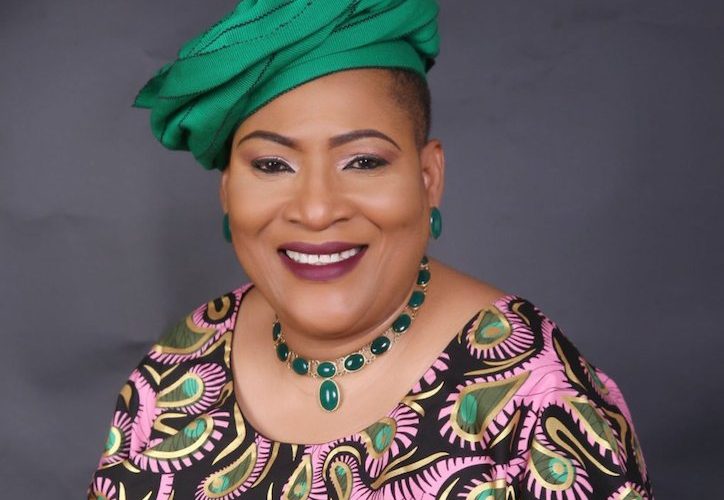 The funeral event for the late Chieftain of the All Progressives Congress, (APC), the Yeye-Sewa of Lagos Chief Mrs. Kemi Nelson commenced on Tuesday, with a Special Joint Valedictory Session by the three Legislative Councils within the Ikeja Federal Constituency, namely Ikeja Local Government Council, Ojodu and Onigbongbo Local Council Development Areas Legislative Councils at the Ikeja Local Government Main-Auditorium.

Leader Ikeja Legislative Council, Hon Adenuga Ayotunde did the opening tribute eulogized with encomiums for the Apex Leader and Member of the Governing Advisory Council of the APC Lagos Chapter.

He noted that most of the party faithful in Ikeja Federal Constituency have not been able to get over the shock of the death of Chief Mrs. Nelson.

The Leader Onigbongbo Legislative Hon Kayode Opayemi in his tribute message stated that Chief Nelson is remembered because of her deeds, people she has helped to achieve their goal and urged everyone to emulate her virtues.

He noted that Chief Nelson had impacted several lives during her lifetime, hence her memory will remain in their minds.

The Member representing Ikeja Constituency II in the Lagos State House of Assembly, Hon Adedamola Richard Kasunmu was emotional and couldn’t hold back tears during his tribute to a woman he described as his mother, which stood by him through thick and thin to achieve his political status.

Rt. Hon James Abiodun Faleke represented by Barr. Olawale Ajala averred that Chief Nelson will be greatly missed by all progressives, becuase she committed her political life to supporting and promoting the principles and ideologies of progressive politics as mentored by Asiwaju Bola Ahmed Tinubu.

Faleke noted that the former APC Southwest Women Leader actually convinced him to recontest and instrumental to his victory for the Ikeja Federal House Representatives position at a time he wanted to move on.

The three council Chairmen of Ikeja LG, Hon Mojeed Balogun, Hon Segun Odunmbaku and Hon Dotun Olakanle of Ojodu and Onigbongbo LCDAs respectively, also joined the grassroots legislators to pour encomiums and praises of the good deeds of the Yeye-Sewa of the Universe as some of her political mentees and associates fondly call her.

They were also corroborated by their vice chairmen who were also in attendance with the APC Chairmen were led by their Chair of Chair and Chairman Ikeja LG, Alhaji Dally Adeokun, Alhaja Iyabode Akerele and Alhaja Sola Kokumo of Ongbongbo and Ojodu LCDAs.

The Evening of Songs and Tributes for Chief Mrs. Kemi Nelson later held in the day at the Haven Event Center, GRA, Ikeja, Lagos.

The event was hosted by the Redeem Christian Church of God, RCCG City of David with songs and lots of tributes for the former Commissioner for Women Affairs and Poverty Alleviation.

Dr. Tunjji Bello who represented the APC Presidential Candidate, Asiwaju Bola Ahmed Tinubu, noted that the former APC Southwest Women Leader will be greatly missed by all, as she represented hope to several people.

In his tribute Asiwaju Tinubu eulogized Kemi Nelso,n described her as a good woman, stated: “I was shocked and saddened by the sudden passing of activist, prominent politician and one of my closest associates, Yeye Kemi Nelson “We shall never forget Yeye Nelson. For her past sacrifice for Lagos and indeed Nigeria, she will be remembered. For her commitment to the womenfolk and the downtrodden, she will be celebrated.”

Her daughter, Mrs. Adetoun Popoola at a point burst in tears as she gave account of how motherly and caring her mum was to everyone that came her path. She promised to endear same to her children

Her sons, Abayomi and Tunji both spoke on how godly and compassionate their mum was.

First child of the family Abayomi Nelson spoke first amongst children and said he will greatliy missed his dear mum, described as a very companssionate mother, who was ready to help anyone he introduced to her.

Tunji Nelson, last born of the family stated that he was looking forth to Mum and Son’s dance for his wedding before the unexpected happened but hope to take solace in the good lessons and deed of his mother.

Other activities continue on 4 pm on Wednesday with the Christian Wake Keep at the Haven, off Oba Akinjobi way, GRA Ikeja, Lagos.