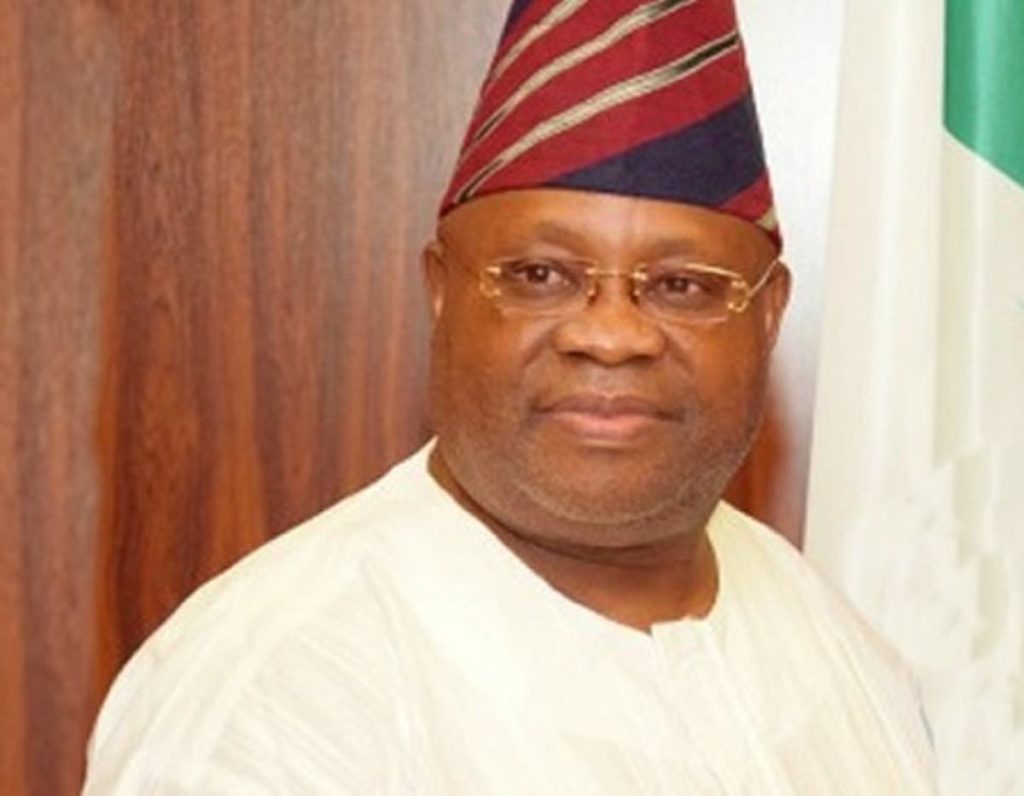 Potential criminal implications of Ademola Adeleke’s academic record are a key prong of Gboyega Oyetola’s prayers before the election petitions tribunal in Osogbo.

To run for office and become governor-elect in Osun last month, Ademola Adeleke tendered a high school diploma and a college degree that were obtained 24 days apart in the United States last year, according to a review of academic credentials before the Independent National Electoral Commission, INEC.

In the records he filed with the electoral commission between March 11 and 18, 2022, and acquired by Peoples Gazette on July 23, Mr Adeleke said he earned his bachelor’s degree in criminal justice from Atlanta Metropolitan State College on August 9, 2021. In the same declaration, Mr Adeleke presented a diploma certificate obtained from Penn Foster High School dated July 16, 2021 — only 24 days prior to his college certificate.

The Gazette learnt that Penn Foster High School is an education consultancy in the U.S. that offers online high school diplomas. Atlanta Metropolitan State College, where Mr Adeleke said he attended, accepts diplomas from Penn Foster, this website said. If Mr Adeleke was admitted into Atlanta Metropolitan for a bachelor’s degree programme with a high school diploma, he should spend at least four years on the course he selected.

But Mr Adeleke, born May 13, 1960, said he didn’t use the Penn Foster diploma to gain admission into college, and The Gazette could not establish or disprove his statement since the school failed to respond to enquiries.

For three weeks, The Gazette sent several emails and exchanged telephone calls with officials of the school, but they failed to give any categorial clarification as to whether or not Mr Adeleke earned a bachelor’s degree there.

Weeks after initially promising to respond after the conclusion of a review of The Gazette’s request by the school’s leadership, officials at the registrar’s office started hanging up calls relating to Mr Adeleke.

The University of Georgia system, which supervises Atlanta Metropolitan State College, among other tertiary institutions in the state, also did not return a request seeking comments.

The Gazette obtained the credentials, which an analyst described as jarring and questionable bearing in mind the politician’s 2018 trial on a similar matter, as Governor Gboyega Oyetola was preparing to challenge Mr Adeleke’s victory before a tribunal in the capital Osogbo.

Mr Adeleke, of the Peoples Democratic Party, had been declared winner of the July 16 election by the electoral office, defeating incumbent Mr Oyetola of the All Progressives Congress by nearly 30,000 votes.

While the election was widely deemed free and fair, including based on the conclusion of The Gazette’s reporters who covered activities across the state during the exercise, Mr Oyetola’s legal team said it was banking on Mr Adeleke’s alleged presentation of forged credentials, a grievous perjury that could cost the governor-elect his victory if established at trial.

Mr Oyetola’s petition was accepted at the tribunal on Monday, with Mr Adeleke’s lawyers filing initial response on Tuesday. The case is expected to proceed to trial in three weeks. Since potential criminal implications of Mr Adeleke’s academic credentials are critical to Mr Oyetola’s petition, the tribunal may be compelled to enlist the support of the U.S. mission in Nigeria to liaise with the law enforcement back home towards getting to the bottom of the matter by either extracting a position from Atlanta Metropolitan State College or deploying other means of investigating the matter.

Mr Adeleke insisted to The Gazette that he didn’t use his Penn Foster diploma to enroll at Atlanta Metropolitan, saying he used a combination of academic scores since 1981 to finish school in 40 years later.

Mr Adeleke said his “university degree was a cumulative outcome of his intermittent higher educational sojourn which started in June 1981 and concluded in August 2021,” according to a statement sent through his chief spokesman Olawale Rasheed.

“The Penn Foster High School certificate was not the basis of his admission and graduation with a university degree,” the statement said. “It was a decision he took to ensure he satisfies agitation as to the status of his secondary education during the 2018 Osun Election.”

“The university degree was a cumulative outcome of his intermittent higher educational sojourn which started in June 1981 and concluded in August 2021.

Thirdly, his admission to the Jacksonville State University, Jacksonville Alabama USA in 1981 was not based on school certificate qualification but, Test of English as a Foreign Language (TOEFL), Academic College Test (ACT) which is equal to SAT (Scholastic Aptitude Test) alongside cumulative review of academic transcript comprising results of promotion examinations from one secondary school class to the other ( Form 1- Form 5). That was a standard practice in the early 80s for admission into United States’ tertiary institutions.

“Admission to United States schools in the 70s and 80s was not necessarily through school certificate qualifications. The conditions are mostly TOEFL, SAT or ACT. These are reviewed alongside your transcripts from secondary school like results of promotion examinations from one class to the other. The governor-elect entered Jacksonville State University, Jacksonville, Alabama, with TOEFL, ACT and his secondary school transcripts in June 1981 after due evaluation by the School authorities.

“He was a student of Jacksonville State University from June 1981 till December 1986.

He transferred his studentship to Atlanta Metropolitan State College ( formerly known as Atlanta Junior College) which is part of the University System of Georgia owned by the State of Georgia USA. He transferred to the school in January 1987, and attended in the 1987 school year and 1991 school year. He re-enrolled in August 2019, fall semester, and attended continuously up till August 2021 when he finally graduated with a BSc in Criminal Justice.

“The cumulative hours and courses he earned over the period as listed accounted for the short time for his degree after he re-enrolled in August 2019. He would have even graduated earlier but he took additional classes to retake three courses he had earlier passed but which the school authorities said have become obsolete.

“The transcripts submitted by the Senator showed the history of his university education. In fact, Jacksonville State University confirmed in writing that Senator Adeleke enrolled in June 1981 and left in December 1986,” the statement further stated.

Mr Adeleke said he obtained a Penn Foster High School diploma to “fulfil the desire within Nigeria that stigmatises whoever has no passing grades in WASC, because WASC result was withheld except F9 score in English,” he said, adding that it was “just an additional certificate.”

Too whiffy for comfort

Still the failure of Atlanta Metropolitan State College to comment on Mr Adeleke’s status, as well as the politician’s inability to supply documents relating to his claims, appeared to suggest there was something to hide, said anti-corruption activist and social commentator Sola Olubanjo.

“It is too whiffy for comfort when a school fails to confirm or deny association with a prominent politician who claimed under oath to have obtained a degree from that particular school,” Mr Olubanjo said. “Every institution cherishes its reputation, and we have not seen such traits from this particular college in this particular case.”

Mr Adeleke’s 2018 false academic claims trial that suddenly went cold without any updates from the prosecutors also did not help the governor-elect in this case, a background that Mr Olubanjo said made the latest allegations “all the more jarring and questionable.”

While expecting additional clarifications to emerge from the tribunal, Mr Olubanjo said Nigerians should not assume that Mr Adeleke’s certificates are genuine just because they were obtained in the U.S.

“There are many schools in the U.S., especially black-run schools like Atlanta Metropolitan State College, where some African politicians go to obtain dubious academic and honorary degrees,” the activist said. “Because the schools are often starved of funds, they are usually ready to compromise in return for heavy financial donations from shady characters.