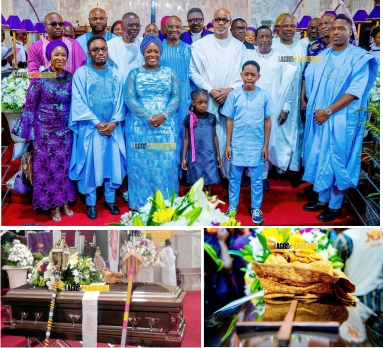 The remains of the late Chief Mrs. Kemi Nelson was laid to rest after a funeral service at the Archbishop Vining Memorial Church, GRA, Ikeja, Lagos on Thursday

The family of the late former Lagos State commissioner for Women Affairs and Poverty Alleviation in the Asiwaju Bola Ahmed Tinubu administration, were joined by the Lagos State Governor, Mr. Babajide Sanwo-Olu who led two governors of Ogun and Plateau States, Prince Dapo Abiodun and Governor Simon Lalong respectively and other well-wishers paid their last respect to late Mrs. Nelson, a woman of substance whose contributions to humanity are worthy of note.

The former Southwest Women Leader is survived by her husband Mr. Yemi Nelson, three children, Abayomi Nelson, the General Manager LASPAK Mrs. Toun Popoola, Tunji Nelson, and grandchildren who were all in attendance with family and political followers and associates

Other dignitaries at the event include serving and past Ministers, Senators, and House Reps Members led by the MHR Ikeja Federal Constituency, Rt. Hon James Abiodun Faleke, while the Chief of Staff (CoS) to the Lagos State Governor, Mr. Tayo Ayinde oversees affairs of Funeral Event with the State government’s deployment, he had to call off his 58th birthday ceremony on Wednesday to mourn and honour the Yeye-Sewa of Lagos and also ensure a successful Funeral for the pioneer Commissioner for Establishment under Asiwaju Bola Tinubu administration.