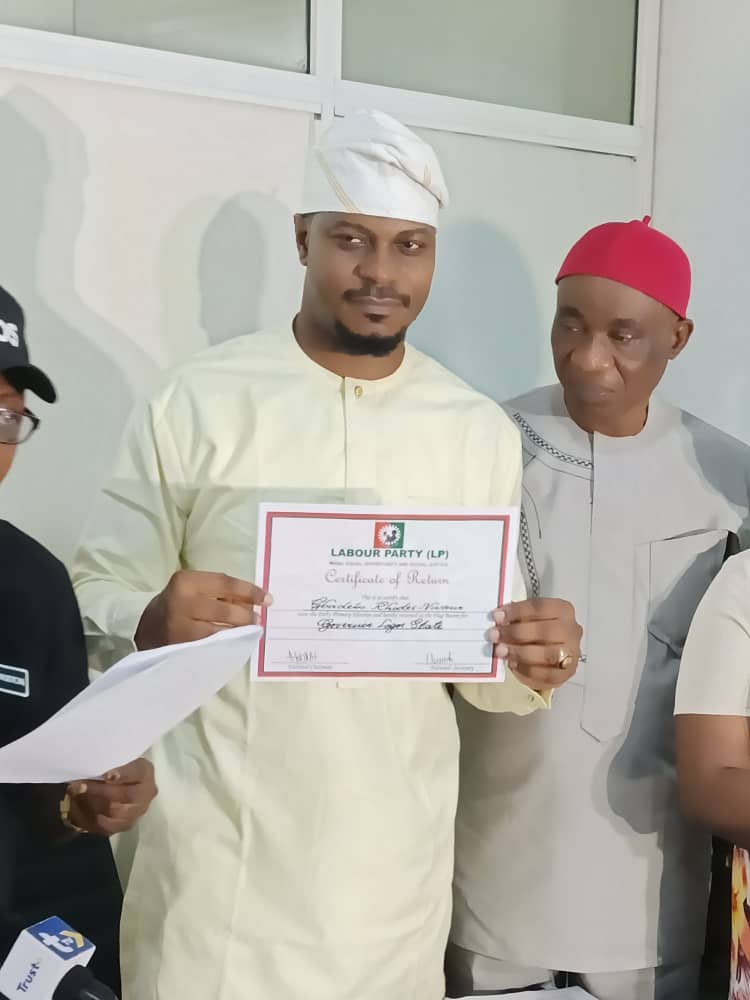 The Labour Party (LP) in Lagos State has officially unveiled its gubernatorial candidate for the 2023 general election. He is 39 years -old, Mr. Gbadebo Rhodes-Vivour.

According to him, the emergence of Gbadebo Rhodes-Vivour as the 2023 Lagos State Governorship candidate followed all the necessary laws, regulations and guidelines as provided in the LP constitution, the constitution of the Federal Republic of Nigeria and INEC guidelines.

Abayomi ordered Ifagbemi to go to court if he felt aggrieved and sought legal address, but not to blackmail the party, noting that the party is ready to take him up for perjury if he continued to parade himself as the governorship candidate of the party.

He said further placing any person as a placeholder of any party before being substituted as the party’s governorship candidate following the party’s primaries was not new to the electoral guidelines.

Said he ” simply to put the records straight, Awamaridi was the chairman of the LP of the Lagos Caretaker Committee at one point. He was made a placeholder for the governorship Primary Election, thus his name was submitted as the Governorship candidate since LP was yet to finally conclude all the required processes.

He added’ ” the place holder status given to Mr. Ifagbemi Aramaridi was one from which he tenderd his official resignation. Awamaridi’s letter of resignation was willfully, voluntarily and clearly signed and tendered. Of course documents don’t lie.

He continues ” Meanwhile, it is not in doubt that if he, Awamaridi by any stretch felt or feels aggrieved knows that the courts are opened to seek legal redress, because his tenure has expired as the chairman of the caretaker committee.

Meanwhile, the governorship candidate of the party, Mr. Rhodes-Valour thanked the national body for resolving the issue of the party’s candidate and the party exco in the state, saying the party can now move forward to start the journey to take Lagos State from the poor leadership provided by the ruling party, All Progressives Congress, APC.

He promised to create Lagos that works for everybody in terms of human capacity, social-infrastructural development, physical development and all of these will be enveloped in trasparency and accountability so that ” when we focus on making sure that the people gets the best possible service, get the best project delivery in record time at the best policy”