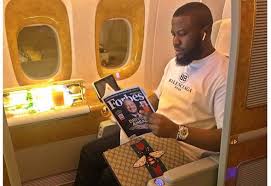 Hushpuppi has claimed to be one of the best cleaners in the prison where he has been remanded since his arrest.

On July 4, Hushpuppi was charged with the conspiracy to commit money laundering before a US court, an offense that attracts a maximum sentence of 20 years imprisonment if convicted.

But during his recent arraignment in court, Hushpuppy appealed to US Judge Otis Wright for temper justice with mercy and a lighter jail term after scoring high in the cleaning activities.

The fraudster told the judge that he was one of the best cleaners in the prison where he has been remanded since his arrest in 2021.

Hushpuppi’s jail’s term reduction comes on the heels of his record which was revealed as part of his memorandum countering sentencing recommendations of prosecutors that showed he cleaned well and related well with other inmates.

It was gathered that his report card for Central Valley workshop for prisoners showed that, between July 2021 when he enrolled and November 2021 when he completed work, Hushpuppi put up “very good” in attitude, quality of work, dependability and productivity.

Hushpuppi’s lawyer, Louis Shapiro wrote in the memorandum submitted on the 5th of this month that “He is currently working within his prison cleaning windows and showers—for which he has received great personal evaluations.”

Sources familiar with the case said that the prosecution and defence have been arguing over the appropriate sentencing for Hushpuppi.

US Prosecutors have asked the federal judge to sentence the fraudster to 11 years in prison and three years of supervised release.

Shapiro further noted Hushpuppi has three minor children in London, U.S. and Dubai to care for, as well as his ailing parents in Nigeria.

The presiding Judge, Wright is scheduled to hear the sentencing arguments of the prosecution and defence of Hushpuppi on September 21 before delivering his judgment in the matter.