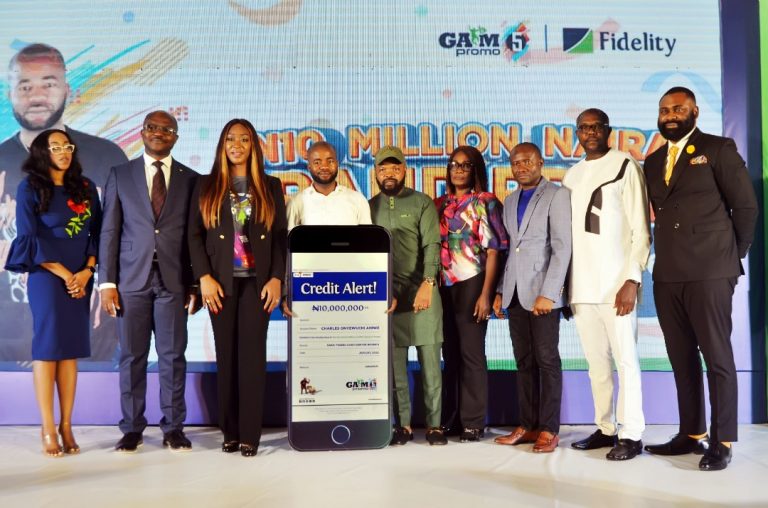 Fidelity Bank has rewarded 13 winners of the Get Alert In Millions Season 5 promo (GAIM 5) with cash prizes.

Mr Charles Ahiwe of Saka Tinubu Cash Centre bagged the star prize of N10 million, while other winners were presented N5 million, N2 million and N1 million in various categories at a ceremony in Lagos.

The monthly prizes were simultaneously presented to winners at Fidelity branches across the country.

The presentation was witnessed by representatives of National Lottery Regulatory Organisation, Federal Competition and Consumer Protection Commission (FCCPC) and the Lagos State Lotteries and Gaming Authority.

Dr Ken Opara, Promo Chairperson & Executive Director, Lagos and South-West, Fidelity Bank Plc, said, “Today marks the fulfilment of the promise we made last November when we commenced the journey of rewarding our customers for maintaining a healthy savings habit with N125 million in cash prizes.

“During this campaign, we have rewarded 1,880 customers with various sums of money comprising 1,800 customers that have won N10,000 each in 36 weekly consolation draws and 80 customers who have won N1 million each in eight monthly draws.

“While we have improved the lifestyle of our customers through the GAIM 5 promo, we are also happy that we are contributing to the Central Bank’s objective of deepening financial inclusion in the country.”

He said the bank had set up SME desks in branches across the country to provide advisory on how to utilise their money judiciously.

He thanked regulators who had supported the journey since the launch of the campaign and through several monthly draws and prize presentation events.

He also thanked the bank customers for keeping faith with Fidelity and providing it with the opportunity to prove why banking was a rewarding venture.

He urged those who were yet to open a Fidelity Bank account to do so as soon as possible saying we have loads of exciting initiatives to be unveiled shortly.

Ahiwe, the star prize winner, who expressed joy said that he just opened a savings account in January after watching one of the bank’s TV commercials on the campaign and had since then been saving money in the account.

“I was surprised when the bank contacted me to say that I have won N10 million.
“I am very grateful to God for emerging the winner of the grand prize and I thank Fidelity Bank,” he said