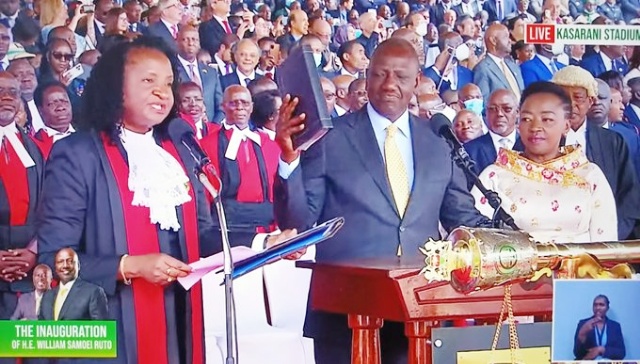 William Samoei Ruto has officially been declared President of Kenya following his swearing-in ceremony, which took place at the Karasani Stadium, Kenya.

He was sworn in by the Chief Judge, Martha Koome, on Tuesday at a ceremony held in the packed Moi International Sports Centre in Kasarani.

Amid cheers from the excited crowd, Ruto swore an oath of allegiance and another oath for the execution of the functions of the office.

Ruto also appended his signature to the corresponding documents, as seen in the live broadcast monitored by our correspondent on Tuesday.

With his inauguration, Ruto becomes the fifth president of Independent Kenya, and the second ethnic Kalenjin after the late Daniel Arap Moi to hold the office.

Hours before his inauguration, the outgoing president Uhuru Kenyatta congratulated Ruto on his victory in the August 9 poll.

Kenyans quoted Uhuru as saying, “As a hallmark of our democracy, therefore, I will, before God and my fellow countrymen, handover the instruments of power to our new president at the Moi International Sports Center Kasarani and with that, the fourth administration will come to an end and the tenure of the fifth administration will begin.”

“My family and I join all Kenyans in wishing the very best to our next President Dr. William Samoei Ruto and extending to him our warmest congratulations for receiving the mandate of Kenyans to lead us as our 5th president.”

The Vice President of Nigeria, Yemi Osinbajo, was also at the swearing-in ceremony.

Osinbajo’s media aide, Laolu Akande, made this known in a tweet which read, “VP Osinbajo now in Nairobi, Kenya where he is representing Nigeria at the inauguration of Dr. William Ruto as Kenya’s fifth President today.

“On arrival, VP congratulates ‘the people of Kenya on this celebration of democracy,’ and added, ‘God bless the Republic of Kenya