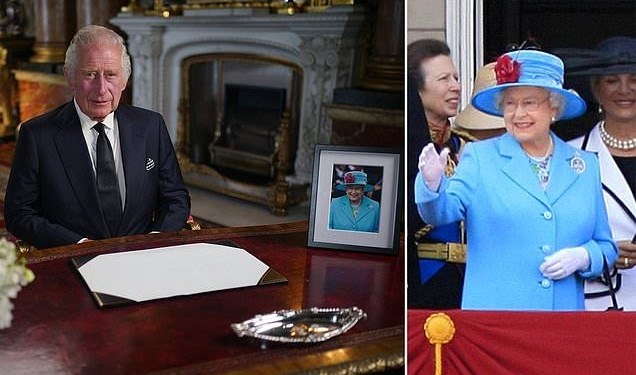 King Charles III has paid tribute to his ‘darling Mama’ the Queen and vowed to ‘renew’ her ‘promise of a life of service’ as he delivered a deeply revealing and personal first address to the nation.

The monarch, holding back tears, said, ‘To my darling Mama, thank you, thank you’, as he hailed Elizabeth II as an ‘inspiration and an example to me and to all my family’ following her death at Balmoral on Thursday aged 96.

In his first spoken remarks since ascending the throne upon Queen Elizabeth II’s death, Charles also declared his “love” for his estranged younger son Harry and Harry’s wife Meghan.
The new monarch further said he could “count on the loving help of my darling wife, Camilla” after she became queen consort.

Charles said he shared the public’s “sense of loss beyond measure” after his mother passed away on Thursday aged 96, after a record-breaking reign of 70 years.
“That promise of lifelong service I renew to you all today,” he said.

“As the queen herself did with such unswerving devotion, I too now solemnly pledge myself, throughout the remaining time God grants me, to uphold the constitutional principles at the heart of our nation.”
Addressing his “darling Mama”, joining his father the late Prince Philip, who died last year, “I want simply to say this: thank you”, the new king said.

“Thank you for your love and devotion to our family and to the family of nations you have served so diligently all these years. May flights of angels sing thee to thy rest.”
As heir to the queen, Charles was duke of Cornwall and duke of Rothesay in Scotland, titles that passed immediately to William on Thursday.
But the highest title for the heir to the throne, prince of Wales, remained in the monarch’s gift to bestow or withhold.
“Today, I am proud to create him prince of Wales, Tywysog Cymru (in Welsh), the country whose title I have been so greatly privileged to bear during so much of my life and duty,” Charles said.
“With Catherine beside him, our new prince and princess of Wales will, I know, continue to inspire and lead our national conversations, helping to bring the marginal to the centre ground where vital help can be given.”

The date of the queen’s state funeral has yet to be confirmed but is expected on September 19.

“In a little over a week’s time we will come together as a nation, as a Commonwealth and indeed a global community, to lay my beloved mother to rest,” Charles said.
“In our sorrow, let us remember and draw strength from the light of her example,” he said.
“On behalf of all my family, I can only offer the most sincere and heartfelt thanks for your condolences and support.
“They mean more to me than I can ever possibly express.”