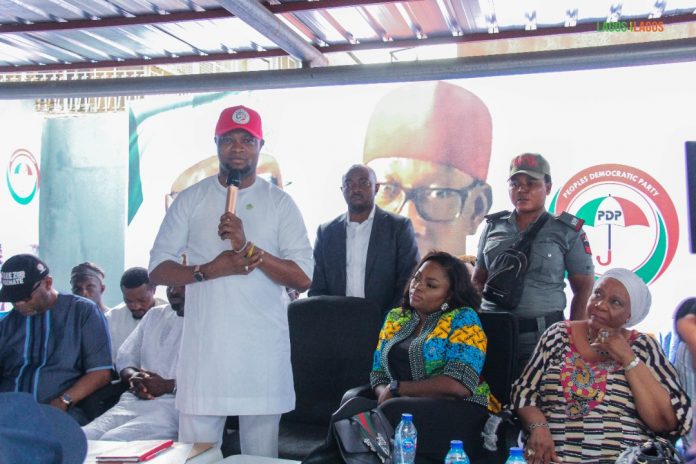 Jandor said it was amusing that the APC was ridiculing his “kind gestures” in bringing succour to those whose vehicles were auctioned.

The Peoples Democratic Party’s governorship candidate in Lagos State, Olajide Adediran, has responded to criticisms by the APC in the state over his visit to owners of vehicles auctioned by the state government.

Mr Adediran, popularly known as Jandor, in a statement through his media aide, said it was amusing that the APC was ridiculing his “kind gestures” in bringing succour to those whose vehicles were auctioned.

“The point to note is that as responsible, law-abiding citizens of Lagos State, neither Adediran, nor his running mate will ever condone the breaking of the state’s laws for any reason,” the statement read.

“This point was made very clear as he reprimanded his hosts for breaking the law.

“However, we must realise that laws are made for the people and not people for the law.

“Therefore, all laws must bear a human face and seek to correct rather than to destroy the very citizens that they were made for.

“In this instance, the penalty for breaking the law in question amounted to killing an ant with a sledgehammer and will potentially create more problems than it was meant to solve.

“Other measures, such as hefty fines, could have served as a deterrent to potential offenders.’’

Mr Adediran also assured the duo that if voted into office in 2023, such harsh punishment for violation of traffic rules would be reviewed.

Mr Adediran and his running mate, Funke Akindele, had visited the homes of Lateef Kolapo and Osinachi Ndukwe, both drivers whose vehicles were auctioned.

During the visit, Mr Adediran frowned at the violation of traffic laws but sympathised with the duo over the loss of their vehicles to auction.

The APC in the state, however, condemned the visit, accusing the PDP candidate of playing politics with human lives and encouraging the breakdown of law and order in the state.