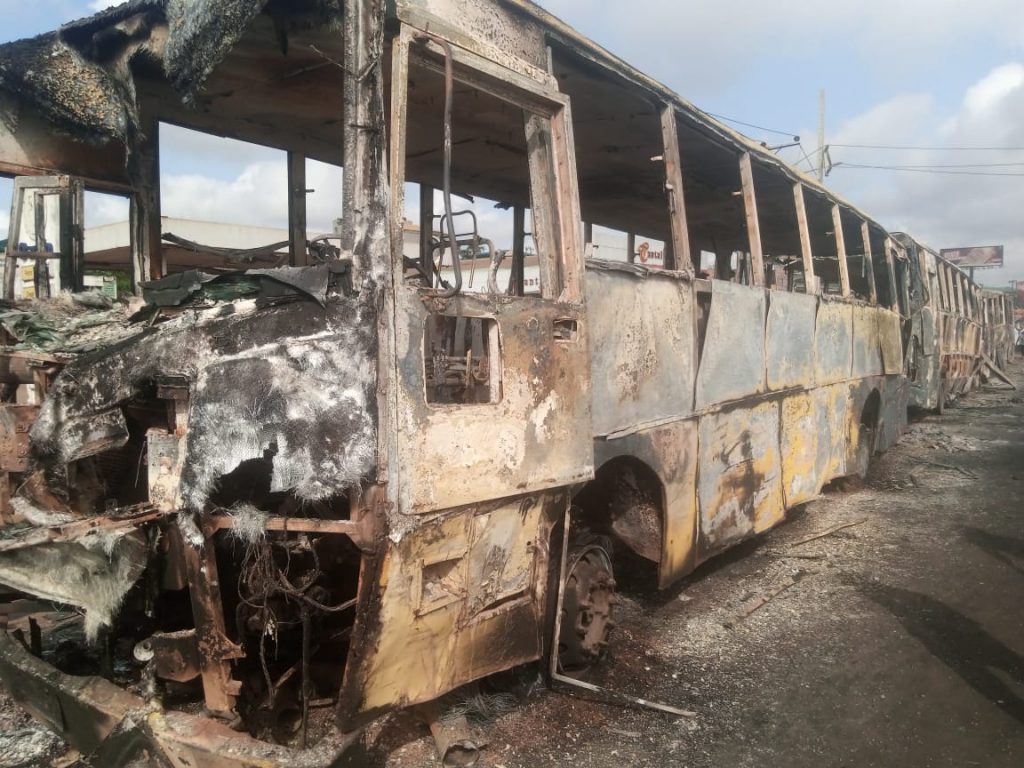 A 33 litres petrol-laden Mack Tanker on Thursday exploded immediately after spilling its content on the Ilo-Awela road via tollgate, Sango-Ota, leaving two people dead and three others severely burnt.

According to a road traffic report from the Ogun State Traffic Compliance and Enforcement Agency, TRACE, said the unfortunate incident occurred at about 1.59 am along Ilo-Awela road adjoining the tollgate.

The report further revealed that the driver was trying to navigate the steepy Ilo-Awela road, before developing a mechanical fault causing the driver to lose control, making the truck descend backwards before it landed on its side and exploded.

Speaking with DAILY INDEPENDENT, Cdr. Ajibade Adekunle, Area Commander, TRACE, Ogun West, who spoke on behalf of Seni Ogunyemi, TRACE Corps’ Commander and Chief Executive, gave an account of the incident, stating, “Unfortunately two people were lost from this crash, involving the driver of the truck who was burnt beyond recognition and a Tricycle operator who was sleeping in his Tricycle when the crash was unfolding, while the other three people suffered varying degrees of burns.

“The corpses have been deposited at the Ota General Hospital Mortuary and the Injured currently receiving treatment at the hospital.

“A total of 12 vehicles were affected by the crash, including; the fuel tanker, A Volkswagen (Danfo) Yellow bus, with registration number GGE448XP, 3 ‘Luxurious’ buses, 4 Tricycle Machines, 3 Motorcycles, countless number of kiosks and shops.” He added.

Ahmed Umar, Sector Commander FRSC, Ogun State, said the multiple crashes were caused by a suspected mechanical deficiency while ascending the Ilo-Awela road before rolling back and got hooked and fell on its side, spilling out the content and went ablaze.

He said, “We have a very catastrophic situation on our hands, but we bless God that it is not more than this because of the time it occurred which is late in the night when the majority of the people engaged in different activities here at the tollgate are away from the location with less Vehicular activities.

“From the report I heard, the crash was caused by over-speeding on the part of the driver who was coming from Lagos inbound Ota, using speed to negotiate the bend into Ilo-Awela which is steep. As a government, we will continue our advocacy for drivers to adhere strictly to every road safety regulation. I have also issued a ban to roadside trading here at the tollgate which shall be enforced going forward.”

Comrade Segun Olaoye, Taskforce Member, Tricycle Operators and Riders Association, TORAN, Sango-Ota Branch, said, the destruction caused by the accident would have been less devastating if our age-long aspiration of using the two empty spaces at the foot of Lagos-Abeokuta Expressway were opened for us to use as garages where we can conveniently park our Tricycle machines off the road.

Adigun Adelabi, the owner of one of the luxurious buses burnt, who spoke with grief, said, “It is with great sorrow I’m speaking right now, my bus that was burnt though insured may not be compensated because one of the clauses they gave was the bus must be parked in a trailer parking bay in the case of any fire incidence when the Vehicle is not in motion, but there’s no parking bay for my kind of vehicle anywhere around here.”