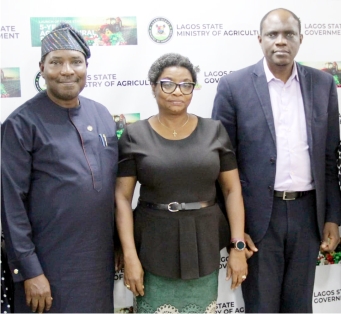 The Lagos State Government has signed a Memorandum of Understanding (MoU) with the South-West Agricultural Company (SWAgCo) on rice production as part of efforts to boost food production in the State.

Special Adviser to the Governor on Agriculture, Dr Oluwarotimi Fashola disclosed that the MoU is not only vital but also germane to the progress of the Rice Value Chain within the length and breadth of the State.

Fashola pointed out that Lagos needs to produce at least 40 percent of the paddy needed at the Imota Rice mill, adding that to achieve this lofty goal, the South-West Agricultural Company (SWAgCo) will assist the State rice farmers in skill development and sundry capacity building.

He also noted that his team and SWAgCO will be meeting with the rice farmers across various divisions of the State, stressing that the State’s 500 hectares of land at Eggua, Ogun State, as well as other rice fields spread across Lagos will also be utilised to achieve the goals.

He added that the success of the pilot phase conducted in the Badagry division with 100 hectares with the Rice farmers earlier has led credence to the workability of the innovative ideas the collaboration of the  Ministry of Agriculture and SWAgCO will birth.

The Managing Director and Team Lead of SWAgCO, Mr. Babajide Arowosafe, stated that what makes the Lagos State Government stand out amongst other States is Governor Sanwo-Olu’s passion for the Rice Value Chain’s development and the unrivalled speed at which the state operates towards agricultural development.

Arowosafe said the Imota Rice Mill is an added advantage the State has over the other South-West States like Ogun, Oyo, Ondo and Osun, maintaining that the Memorandum of Understanding will further give the food production efforts of the State, significant mileage.

SWAgCo, a subsidiary of Odua Investment group, is a leading Agricultural Investment Company and its Memorandum of Understanding with the Ministry of Agriculture can only be a win-win situation for the two parties