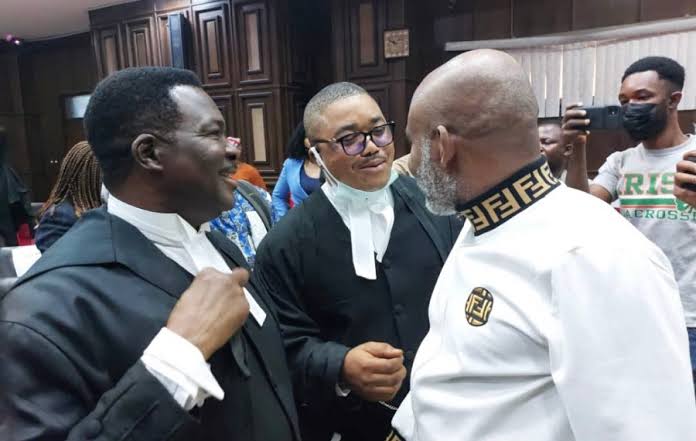 The Appeal Court in Abuja has upheld the Federal Government’s application for stay of execution of the October 13 judgment which set Nnamdi Kanu, leader of the Indigenous People of Biafra (IPOB), free.

Justice Haruna Tsanammi also ordered that the result of the ruling be forwarded to the Supreme Court within seven day for expeditious hearing.

This means Kanu is expected to remain in the custody of the Department of State Services (DSS), pending when the Supreme Court hears the case.

The Court of Appeal on October 13 discharged Kanu who is being prosecuted by the Federal Government at the Federal High Court in Abuja for charges bordering on treasonable felony and terrorism.

A three-man panel of the Court of Appeal said the Federal High Court lacks the jurisdiction to try him in view of his abduction and extraordinary rendition to Nigeria in flagrant violation of the OAU convention and protocol on extradition.

The court also held charges preferred against Kanu did not disclose the place, date, time and nature of the alleged offences before being unlawfully extradited to Nigeria in clear violation of international treaties.

To stop Kanu’s subsequent release, the Federal Government had applied that the execution of the judgment be suspended pending the resolution of its appeal lodged at the Supreme Court.

Justice Tsanammi on Friday held that the counter affidavit filed against the Federal Government’s application by Kanu’s legal team was misleading.

Mr Kanu has repeatedly called for the breakaway of a significant chunk of southern Nigeria to form the Republic of Biafra.

On October 2015, he was arrested by Nigerian authorities on an 11-count charge bordering on “terrorism, treasonable felony, managing an unlawful society, publication of defamatory matter, illegal possession of firearms and improper importation of goods, among others.”

He was granted bail on April 2017 for medical reasons.

However, Mr Kanu fled the country in September 2017 after an invasion of his home by the military in Afara-Ukwu, near Umuahia, Abia State.

He was then sighted in Israel and later continued to rally his supporters in Nigeria to employ violence in achieving secession.

“He has, upon jumping bail, been accused of engaging in subversive activities that include inciting violence through television, radio and online broadcasts against Nigeria and Nigerian State and institutions,” Minister of Justice, Abubakar Malami said after Kanu was rearrested and brought back to Nigeria in June 2021.

“Kanu was also accused of instigating violence especially in the Southeastern Nigeria that resulted in the loss of lives and property of civilians, military, para military, police forces and destruction of civil institutions and symbols of authorities.”

Mr Kanu has denied any wrongdoi