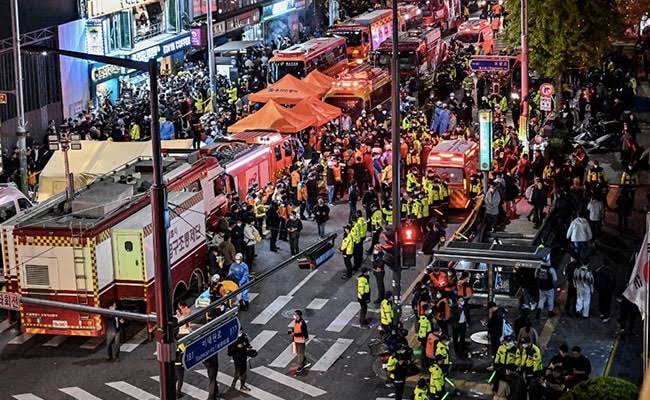 President Muhammadu Buhari, on Sunday, extended heartfelt condolences to President Yoon Suk-yeo, the Government and people of the Republic of South Korea, as well as to families of victims of the tragic incident at Itaewon in Seoul district.

A Halloween crush killed some 153 people in a packed nightlife area in Seoul on Saturday.

A statement by Femi Adesina, Buhari’s Special Adviser on Media and Publicity, said, “The President sends prayerful wishes for the speedy recovery of the injured, healing and comfort to the entire nation as they grieve the heart-breaking loss of over 150 people, mostly teenagers and people in their twenties.

“President Buhari assures President Yoon that Nigeria stands with the people of Korea at this difficult and trying moment.”

Yoon expressed condolences to the victims, mostly teenagers and people in their 20s, and his wishes for a speedy recovery to the many injured in one of the South Korea’s worst disasters and the world’s worst stampedes in decades.

“This is truly tragic,” he said in a statement. “A tragedy and disaster that should not have happened took place in the heart of Seoul last night.”

A huge crowd celebrating in the popular Itaewon district surged into an alley on Saturday night, emergency officials said, adding the death toll could rise.

Choi Sung-beom, head of the Yongsan Fire Station, told a briefing at the scene 82 people were injured, 19 of them seriously. The deaths included 22 foreigners, he said.

Families and friends desperately sought word of loved ones at community centres that had become makeshift facilities for missing persons.

As of midday, the Interior Ministry said at least 90% of the victims had been identified, with delays affecting some foreign nationals and teenagers who did not yet have identification cards.

South Korean tech and mobile game firms including Kakao (035720.KS) and NCSOFT (036570.KS) pulled their Halloween promotions after the tragedy, while amusement park Everland cancelled Halloween-themed events. Many regional governments and organisations have cancelled or reduced festivals and other celebrations.

It was the first Halloween event in Seoul in three years to be virtually free of COVID-19 restrictions and social distancing. Many of the partygoers were wearing masks and Halloween costumes.

Twenty-four hours before, there were already warning signs that the festivities were attracting dangerous numbers of people, and victims and their relatives questioned an apparent lack of crowd control