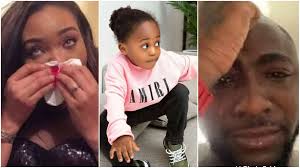 This is not the best of times for the popular music star, David Adeleke aka Davido, as he lost his first son, Ifeanyi Adeleke. He died at the very tender age of three.

He was rushed to Evercare Hospital in Lekki where he was pronounced dead on arrival.

The couple had traveled for a family gathering to Ibadan, on Sunday, 30 October, 2022, and had left Ifeanyi with his minders who can’t explain how he entered the pool without being noticed and drowned.

A  visibly distraught and inconsolable Davido was removed from Evercare Hospital and taken to his father’s house.

Prior to his death, Davido had posted a video on his Instagram where he was teaching Ifeanyi how to and praising his fast learning ability.

“This one go learn fast,” he commented on his Instagram page.Davido’s son’s tragic event is coming four years after another popular singer, Oladapo Daniel Oyebanjo popularly called D’Banj and his wife, Lineo Didi, lost their son in another tragic drowning incident.

Confirming the death of his son, the popular Nigerian Singer and entertainer posted a black photo on his Instagram account with the caption; “Trying Times. But my God is Always and Forever Faithful”