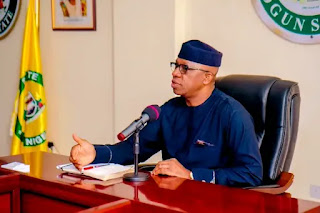 The Ogun State governor, Dapo Abiodun, has disclosed that his administration will turn the sod of $800m Special Agro-Processing Zone to be sited at the Agro-Cargo Airport in Ilisan-Remo, on Friday.

Abiodun disclosed this recently at the Treasury Board Meeting, held at Obas Complex, Oke-Mosan, Abeokuta.

He added that the project which would be executed by Arise Integrated Company, would be the biggest Investment in Nigeria as it would provide between 15,000 to 20,000 jobs for the people.

He explained that the turning of sod, which would mark the beginning of the first phase of the multi million dollars investment, would take place on Friday, this week, while construction of structures for the project would commence in the first week of December.

“By the grace of God, we are going to do the ground breaking of the first Special Agro Processing Zone in the country, the very first. The first phase is a $400m investment and it is going to be in two phases. This has never happened before in this country.

“Construction is going to start first week in December. I am aware that Nigeria Customs Service also wants to start construction immediately in the same aerotropolis.