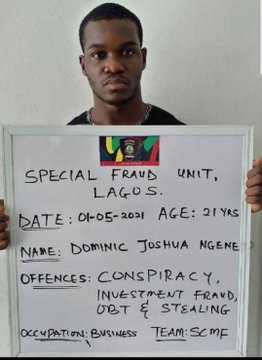 This may read like the plot of a Nollywood crime movie: Dominic Ngene Joshua was arrested in May 2021 by the police for the alleged diversion of investors’ funds worth over N2 billion. He was subsequently charged to court and granted bail in early 2022.

But alas, a few days ago, he was arrested by the Economic and Financial Crimes Commission (EFCC) over another alleged fraudulent scheme.

Who is Dominic Ngene Joshua and why is his matter raising eyebrows? He is a 21-year-old managing director of Brisk Capital Limited and a self-styled investment expert who hails from Ebonyi state.

Joshua earned notoriety in May 2021 when the police special fraud unit (PSFU) in Ikoyi, Lagos state, announced his arrest. The mugshot taken after he was nabbed for the alleged crime went viral on social media.

Prior to his arrest, several Nigerians had accused him of allegedly defrauding them of billions of naira.

The “investment expert” was said to have asked victims to invest in Bitcoin, forex trading, real estate and oil & gas with a promise of “prompt and accurate” 60 percent return on investment (ROI) per month, plus the guarantee of the invested capital.

‘HUNTED FOR VICTIMS ON SOCIAL MEDIA’

The police had claimed that Joshua lured his victims on social media platforms, such as Instagram, Facebook and LinkedIn, with the claim that he is a financial investor of repute that manages funds for individuals and companies.

His arrest was a respite to victims who alleged that they had been defrauded of their hard-earned resources.

Subsequently, Joshua was arraigned before the federal high court, Ikoyi unit on a 14-count charge bordering on obtaining money by false pretence.

In March 2022, the court granted an order of interim forfeiture of the 14 landed properties linked to Joshua following an ex-parte motion filed by the police.

We understands that the crime suspect was also granted bail in the first quarter of 2022.

More than a year after his first arrest, Joshua was on November 1 arrested by the EFCC for allegedly participating in the hack of a commercial bank in which
N1.4 billion was allegedly stolen.

The Brisk Capital Limited MD was arrested alongside Abdumalik Salau Femi and Ismaila Yusuf Atumeyi, a candidate of the New Nigeria Peoples Party (NNPP) for the Kogi state assembly.

The anti-graft agency disclosed that the sums of N326 million and $610,500 were recovered in cash from the suspects.

Speaking with TheCable, Eyitayo Johnson, spokesperson of the police special fraud unit, said the fresh controversy surrounding Joshua regarding the bank hack is not within the purview of the police.